Eagles and twins and Saints, oh my! 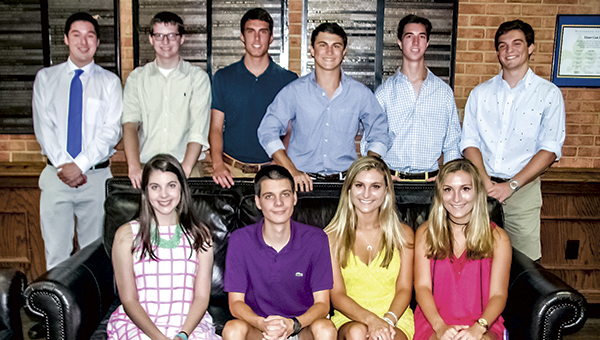 Nansemond-Suffolk Academy’s class of 2016 features seven Eagle Scouts and two sets of twins, quite the accomplishment for a class of only 77. Seated, from left, are the twins, Mercer and Mitchell Hartman (Mitchell is also an Eagle Scout) and Chrisy and Julia Hayden. Standing are the other six Eagle Scouts, from left, Zie Medrano, Sam Towler, David Forman, Bowman Browne, Michael Hughes and Connor King.

Only about 5 percent of young men who enter Boy Scouts eventually becomes an Eagle Scout.

So it’s quite remarkable that in Nansemond-Suffolk Academy’s class of 2016, numbering only 77 in all, there are seven Eagle Scouts and two sets of twins.

In another twist, the two sets of twins have last names that are close alphabetically, so all four will be seated together during Saturday morning’s graduation at the school on Pruden Boulevard.

One set of twins is an identical pair that has attended NSA for 15 years, including two years of preschool.

Julia and Chrisy Hayden will both attend North Carolina State University. They will room separately but, in another coincidence, were assigned to the same hall.

“Now if I need clothes, she can just throw them out the door to me,” Chrisy said of her sister.

“We switch everything,” Julia said, although each sister does steer clear of items she knows her twin really likes.

Julia plans to major in pre-veterinary or pre-health, while Chrisy aims to eventually become a physician assistant.

“It makes everything easy and hard,” Mercer said of being a twin.

But when it came time to choose colleges, they decided to go their separate ways.

“We wanted to make our own friends,” Mercer said.

Mitchell is also one of his class’s seven Eagle Scouts. He participates in Troop 17 in Franklin.

“It was a lot of fun,” he said of being in Boy Scouts and earning his Eagle. “You have to build up each year. It’s a good experience.”

Michael Hughes of Troop 36 said he also enjoyed being a Boy Scout.

“It was a really good way to connect with my dad,” Hughes said. “It was something we did together. It instilled a lot of morals and virtues in me that I live today.”

Hughes is headed off to the University of South Carolina to study risk management.

The other five Eagle Scouts all come from Suffolk’s Troop 1 at Main Street United Methodist Church, which produces an impressive amount of Eagle Scouts each year.

Bowman Browne, like Hughes, enjoyed doing Boy Scouts because he connected with his father.

“My dad was my Cubmaster,” said Browne, who is a third-generation Eagle Scout. One of his favorite memories is whitewater rafting on a Scout trip, he said.

Browne will study something business-related at the University of South Carolina.

“I did some really cool things,” he said, adding that he wanted to join Boy Scouts for the camping and outdoors opportunities.

He will attend the U.S. Naval Academy, following in the footsteps of his father.

David Forman said he “enjoyed learning about leadership” in Scouting.

“It’s really helped me in sports and school,” said Forman, who has participated in cross country, swimming and track.

Zie Medrano said he learned a lot in Scouts.

“I think it kind of instilled in me confidence as a leader,” he said.

He’ll use that confidence at the College of William & Mary, where he will major in government and maybe go to law school.

Sam Towler said his fondest memories of Scouting are camps, hiking, scuba diving and being a leader at the 2013 National Jamboree.

“It’s fun, and people should try it,” he said of Scouting.

Several improvements around the school, including picnic tables scattered around campus and the shelving and paint in the band room, are the result of some of students’ Eagle projects.

A shed in the Magnolia Lakes neighborhood was completely destroyed by fire on Friday afternoon. A fire destroyed this shed... read more