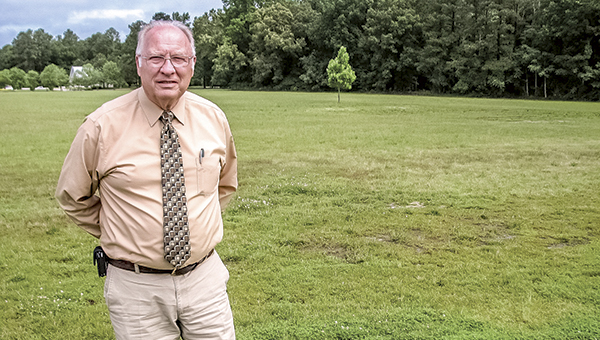 Dan Kemano, director of the state veterans cemeteries, shows where new columbarium buildings at the Albert G. Horton Jr. Memorial Veterans Cemetery will be constructed. The buildings will be similar to existing buildings on the other side of the cemetery. 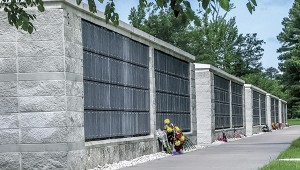 “We’re having to continually expand,” Kemano said of the state veterans cemetery located on Milners Road in Suffolk. The cemetery performed 1,054 burials last fiscal year and already has surpassed that number this fiscal year, with about a month to go.

The project also will include a road that leads in front of the columbarium buildings and cremation gardens to a traffic circle with a small committal shelter, Kemano said. That will give the cemetery two committal shelters to use so it can hold more than one service at a time.

Construction will start this month and take about five to six months, Kemano said.

Each columbarium holds 384 niches, Kemano said. The new columbariums and gardens will be placed to the right of the committal shelter to mirror the layout to the left of the shelter.

In about two years, the cemetery will start a new project to pre-install concrete vaults in its gardens reserved for traditional in-casket burials, Kemano said. He aims to apply for a federal grant to cover the cost of that project, as well.

The vaults were installed in some of the cemetery’s gardens about two years ago. They benefit veterans and their families because it means the only thing a veteran’s family has to pay for is a $300 administrative fee when a spouse is buried. Previously, families had to pay for the vault when they were not pre-installed.

Eventually, the cemetery will expand into what is now a wooded area behind the columbarium buildings and cover most of the 74 acres on the property, Kemano said. Despite the rapid pace at which the cemetery is filling, he estimates the cemetery will be able to continue to bury veterans for 60 to 80 more years.

Burial at the cemetery is available to all service members who died on active duty, retired or were honorably discharged, as well as their spouse and unmarried minor children under the age of 21. Some Reserve and National Guard members are also eligible.

Except for the $300 administrative fee for he spouse, there is no cost for the site, opening and closing of the site, headstone, double-depth crypt for veteran and spouse, funeral services and perpetual care. Standard military honors such as the flag to drape the casket and honor guard at the service also are provided at no charge.

The city of Suffolk must repay real estate taxes, with interest, it charged on open space in a local neighborhood... read more