Lights, sirens and a sniper rifle 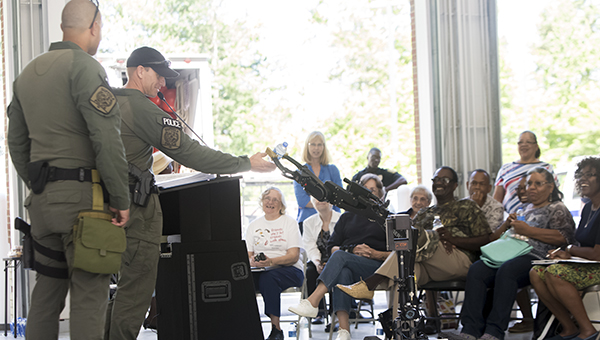 Master Police Officer Paul Hutta is handed a bottle of water from the Suffolk Police Department’s robot during a presentation about special operations at the concluding meeting of the department’s Senior Citizens Academy on Wednesday.

She just had to hold the sniper rifle.

As Investigator Ryan Linville hefted the weapon and showed Elouise Cheeks how to check that it wasn’t loaded, her eyes gleamed and the smile she’d worn for much of the morning as she’d looked at various police equipment and vehicles grew even wider.

She seemed almost starstruck as Linville moved with her from one piece of equipment to another, clad in the green SWAT fatigues he wears as part of the city’s elite special operations team. 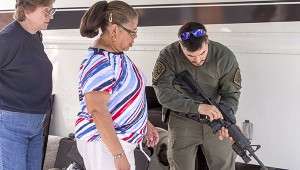 Elouise Cheeks watches as Investigator Ryan Linville checks to make sure a police department assault weapon is safe for her to handle.

“First, you check to make sure the magazine is not inserted, and then you have to check to be sure there is no cartridge in the chamber,” he tried to say for the third time, as Cheeks, June Little and LeeAnn Belcher giggled beside him.

They were having a little fun at his expense, and he didn’t seem to mind, but there was still an important firearm safety lesson to teach the ladies, who were part of a larger group of 37 senior citizens on a field trip to Suffolk Police Precinct No. 2 on Wednesday.

This was the last class of the year for the police department’s Senior Citizens Academy, and it was all hands-on, something of a show-and-tell opportunity for Suffolk’s finest.

There was excitement in the air. Truth be told, how often does one get to hold a real sniper rifle? Or engage the lights and siren on a police car? Or sit atop a police-edition personal watercraft? Or pile into the back of a SWAT van as if getting ready to head to a standoff? 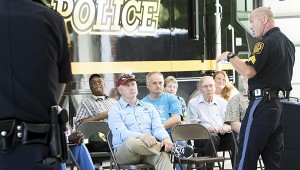 “This program, in general, is important, because it expands our connections with the community,” Master Police Officer Chris Butler said during a break between oral presentations and the hands-on portion of the morning-long event.

“It answers questions and helps them understand what we do,” he added. “A lot of people expect when we show up for us to perform miracles.”

During the course of the eight three-hour sessions of this year’s academy, participants learned a bit more about what law enforcement really entails, along with the real limitations police encounter when trying to do their jobs.

Television shows like the “CSI” series may be incredibly popular, but they also tend to create unrealistic expectations of police officers, he said. The academy “helps dispel the myths,” he added.

“This is highlighting, specifically for Suffolk, what they can expect from their police department.”

This is the second year Suffolk has offered the program for senior citizens, and participants seemed impressed by what they have learned and eager for their friends and others in the city to go through the experience.

“You see things on the television with the (crime scene investigation) shows, but being able to see up front and personal … you find out the purpose of everything,” said Shirley Brockman.

“I’ve got great respect for the police department … which has helped me become a better citizen.”

Louise Perkins liked the program so much last year that she became a volunteer, doing mostly clerical work, for the police department this year. She also helped with some of the logistics of Wednesday’s tour of the department’s special operations.

“It was very informative,” she said of the program. “I live at Lake Prince Woods, and I’m trying to encourage the residents there to take the class. They teach you about cellphones and scams and how to look out for yourself — to be aware.

“It teaches about personal safety and how to handle being stopped by the police — and I never have been.”

In fact several of the participants, as they peered into the police cruiser parked outside a garage on the precinct lot, said they’d never sat in one before. Some seemed determined not to make Wednesday their first experience inside a police car. But others eagerly took the driver’s seat and switched on lights and sirens.

They emerged from the car with the same grins that Elouise Cheeks had when she held the sniper rifle.

One dead after shooting

Suffolk police are investigating a shooting that left a male victim dead Wednesday evening. The shooting was reported at 6:26... read more