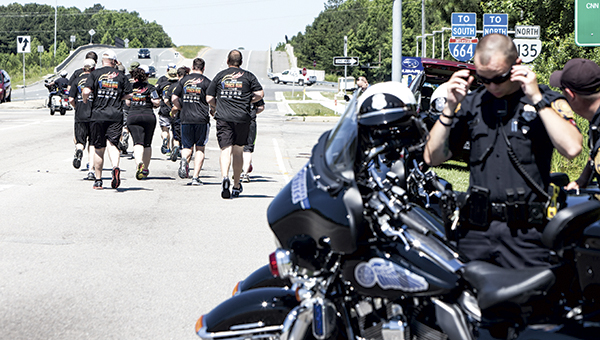 Portsmouth police officers prepare to mount their motorcycles after escorting the team that delivered the Olympic Flame of Hope to the Suffolk city line on Wednesday during the Law Enforcement Torch Run in support of Special Olympics Virginia. In the distance, Suffolk public safety officers head out on their 7.2-mile run to the Isle of Wight County line.

The pass was quick and came without a ceremony or any other formality.

One moment a runner at the front of a phalanx of Portsmouth police officers held the torch, and the next it was in the hands of Major Gerald Brandsasse of the Suffolk Police Department. 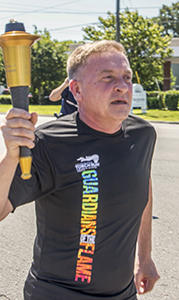 Major Gerald Brandsasse of the Suffolk Police Department holds the Olympic Flame of Hope after taking the handoff from a Portsmouth police officer during the Law Enforcement Torch Run Thursday in support of Special Olympics Virginia. Brandsasse and about 15 other public safety officers carried the torch in shifts on their way along Bridge Road to the Isle of Wight County line.

And then, Brandsasse and about 15 other Suffolk police officers, firefighters and sheriff’s deputies were off, running west along Bridge Road, toward their own handoff to a group from the Smithfield and Franklin police departments.

Along the way, each runner took a turn carrying the Olympic Flame of Hope.

The public safety officers were all there on Thursday to participate in the annual Law Enforcement Torch Run in support of Special Olympics Virginia, which will begin its annual games in Richmond on Saturday.

“I just have a big heart for these kids,” said Master Police Officer Paul Hutta, one of the organizers of the Torch Run from Suffolk.

As an avid athlete competing in triathlons and other events throughout the year, Hutta said he has an extra incentive to support the athletes in the Special Olympics, who participate in the games each year, despite the handicaps that stand in their way.

“A lot of people take things for granted,” he said. “It’s exciting and fun to see them enjoy life.”

The Suffolk public safety officers were the second link in a chain that started at one end of High Street in Portsmouth and ended at the Isle of Wight County line on Bridge Road.

“The weather was perfect,” Hutta said.

Across the Hampton Roads region, police departments took part in the event on Wednesday and Thursday. There have been similar runs in each of 18 regions around the commonwealth since June 4.

All of the running will culminate today, when officers from the Metro Richmond Police Department complete the final leg and enter Robins Stadium at the University of Richmond for the opening ceremonies.

Hutta said Suffolk will not be represented at those ceremonies, as most of the participants have to work.

But they collected about $500 in donations for the event, and they enjoyed the chance to work with each other and interact — albeit briefly — with their comrades from Portsmouth.

“It’s nice to do the handoff,” he said. “You get camaraderie between the departments.”

More than 2,000 officers around the state participated in the event, carrying torches across more than 1,900 miles of Virginia’s highways, according to a press release from Special Olympics Virginia.

Since last June, law enforcement participants have raised a record $1.3 million, pushing the total of their contribution to the event since 1986 above the $18 million mark.

This will be the first year the Special Olympics has held an outdoor opening ceremony, and the event is free and open to the public.

For more information about how to support the athletes — Special Olympics Virginia is especially looking for folks to come and cheer for everyone — visit www.volunteer2cheer.com.

Suffolk police have identified the victim of a shooting on Wednesday night. Keenan Ferster, 23, died in the shooting, according... read more