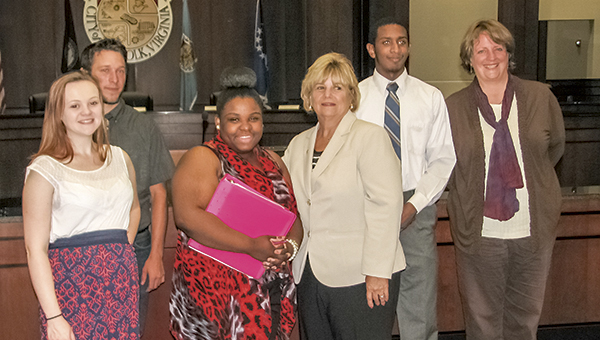 Four Lakeland High School students were an unusual addition to the agenda at a recent City Council meeting.

“Government is needed in schools,” Chavez said. “It teaches you you’re the only person that can make a difference for yourself.”

Barker said the Project Citizen curriculum “helps students engage with government through a series of exercises culminating in the presentation of a project to the appropriate government officials.”

In the case of the topics the four classes selected, the appropriate government officials happened to be City Council in every case.

Each class chose a topic, did the research, gathered signatures on petitions, put together a presentation and sent a representative to City Council.

“Everybody was involved with this,” Barker said. “People had different interests, so we factored them into the project, whether it was artwork or research or writing. They did a fantastic job.”

Boles said her class’s project was light rail. The class found expanding it to Suffolk would improve economic development and connectivity and decrease pollution from buses.

“It’s getting us more involved at our age, because we’re going to go in the real world and we’re going to have to know what’s going on around us,” she said.

Chavez’s class considered a lot of different topics before landing on mosquito control.

“It was something I felt strongly about,” he said. “You have to collect your data and your information and have something you need to state your opinion about.”

Phillips’ class focused on the availability of recreational facilities. He said he found a lot of support for more facilities as he collected signatures.

“Our solution to this problem is to get a relationship between police officers and the community and having a better Neighborhood Watch program,” she told City Council during the June 1 meeting.

The students also said they learned from watching City Council operate that night.

Barker said she plans to present about the students’ success at the National Council for Social Studies’ annual conference in Washington, D.C., in December.

The Suffolk School Board on Thursday awarded a contract to construct two new schools in North Suffolk to Blueridge General... read more