Faster and farther at Kilby Shores 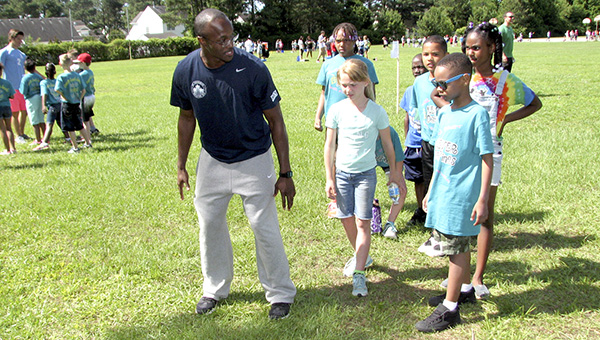 Keith Ricks, a King’s Fork High School graduate and 2016 Olympic hopeful, shows a class of Kilby Shores Elementary School students how to do the long jump during their field day on Monday.

The Olympic hopefuls on the field at Kilby Shores Elementary School on Monday were numerous, but only two of them have a hope of qualifying for this summer’s games in Rio de Janeiro, Brazil.

The Kilby Shores students will have to look ahead a little further, perhaps to 2024 or 2028.

The elementary students spent part of their field day training with Suffolk native Keith Ricks and Newport News native Kenneth Smith Jr., both Olympic hopefuls who will seek a spot on Team USA at the Olympic trials next month in Oregon. The students did a 30-yard dash and a long jump under the instruction of the world-class track athletes, who gave them tips on how to run faster and jump farther.

“I see myself in a lot of kids,” said Ricks, 25, a King’s Fork High School graduate who went on to run track at Virginia Tech, where he broke five school records and was an ACC champion. He also earned a master’s degree at Old Dominion University. 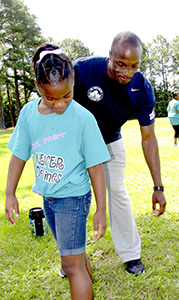 Keith Ricks, a King’s Fork High School graduate and 2016 Olympic hopeful, and Li’Niya Richardson look down at a tape measure to see how many feet Li’Niya’s long jump was during Kilby Shores Elementary School’s field day on Monday. Ricks was a participant in a program meant to inspire young people through sports.

Ricks and Smith were at the school’s field day as part of Dick’s Sporting Goods’ “Grit Before Gold Tour,” which is taking place at schools across the country. Ricks and Smith both work for Dick’s as part of the retailer’s Contenders program, which actively seeks to employ Team USA athletes with flexible hours and competitive pay so they can continue to train.

“I had role models, guys that are from the area that meant a lot to me,” said Ricks, who works at the Suffolk Dick’s store. He named specifically Portsmouth native and Suffolk resident LaShawn Merritt, a 2008 Olympic gold medalist.

The athletes shared their experiences with the young field day participants, who were excited to meet potential Olympic athletes.

“It taught me how to accomplish goals,” Ricks told the students. “You’re always trying to get faster or break a record. I’m always looking to get better in everything I do.”

Ricks also shared he has been to 30 different countries competing in track. His specialty events are the 100- and 200-meter dashes, and he made it to the semifinals of the Olympic trials in 2012.

His first professional meet was in Beijing, China, in the same stadium that hosted 2008 Olympic events, in front of 60,000 screaming fans.

On Monday, there were fewer spectators but no less determination among the students to do their best. In addition to the events Ricks and Smith led, students threw footballs, played cornhole and more. Members of the Lakeland High School boys’ varsity soccer team helped run many of the games.

Ricks said he hopes the students realize that any kid can come from anywhere and make it as an athlete or whatever their chosen field is.

“It can happen to everybody,” said Ryan Ross, Dick’s Sporting Goods community marketing manager. “It’s good to get out into the community and show the kids what sports is all about and the power of sports and why sports matter.”

The Suffolk Christian Academy graduates pause for a photo before their graduation ceremony Saturday at Southside Baptist Church. Pictured are... read more