A family of Eagle Scouts 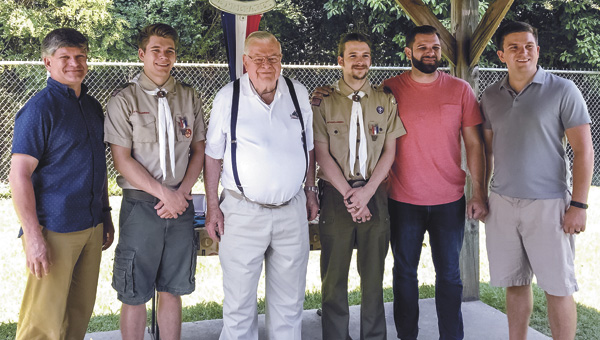 Six men in three generations of the Goodwin family have earned the Eagle Scout rank. From left are David Goodwin, his son Jordan Goodwin, his father, Clif Goodwin, and his other three sons, Josh Goodwin, Jeremy Goodwin and Jeff Goodwin. (Submitted Photo)

For the Goodwins, Scouting runs in the family.

Joshua and Jordan Goodwin were both named Eagle Scouts on Saturday, joining their father, grandfather and older brothers in three generations of Eagle Scouts.

The ceremony, which was held at Nansemond Swim Club, saw Joshua and his younger brother, Jordan, awarded the highest rank in the Boy Scouts of America. Jordan said he dreamed of this moment since he was young.

“I knew from the very beginning that I wanted to be an Eagle Scout,” he said.

The ceremony itself was a family affair. Joshua and Jordan’s older brothers, Jeremy and Jeff Goodwin, were in attendance, in addition to their father and grandfather, who are all Eagle Scouts.

“The whole family has always been very involved in Scouting,” said Jillian Goodwin, the sister of the quartet of Eagle Scouts.

Their grandfather, Clif Goodwin, read the Boy Scout oath during the ceremony. Clif Goodwin achieved the rank of Eagle Scout more than 70 years ago.

“He had just turned 88. It was great to see the pride he has to see his son and four of his grandchildren become Eagles,” Jillian said.

The ceremony featured speeches from the Goodwins’ various mentors, as well as from family members. Jordan said the small ceremony for family and friends was moving.

“It was pretty emotional,” he said. “You could see people choking up a little during the oath.”

Jordan added that there was some pressure to achieve the rank of Eagle Scout, but it just made him more determined.

“I was kind of forced into it,” Jordan said, “But several years passed and I learned the true meaning of Scouting, and I realized that I really did want to be an Eagle.”

Though Joshua had completed his project in 2012, he was unable to have his Eagle Scout ceremony until this year. Jordan said the timing was not originally intentional, but he was happy to get his Eagle Scout alongside his brother.

Jillian said that she was happy to see her younger brothers be named Eagle Scouts.

“It was really cool to see my brothers accomplish that,” she said.

Jordan said the event was special because his entire family was in attendance.

“We don’t have that many chances to have the whole family here,” he said. “So this event was extra special.”

Jillian, a member of the board at Nansemond Swim Club, said the brothers elected to have the ceremony at the swim club because of logistics, as well as sentimental reasons.

“My family has been going to the pool here since before I could walk,” Jordan said. He said the pool was the obvious place to hold the ceremony.

After the awarding of the Eagle Scout, the Goodwins also rededicated the play area, which older brother Jeremy fixed up for his Eagle Scout project.

About 1,000 Suffolk voters in visited the polls on Tuesday to choose party candidates for the 4th Congressional District. On... read more