‘The man’s a legend’ 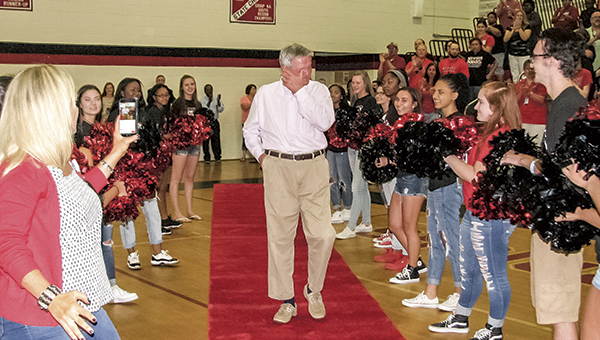 Thomas McLemore reacts to a gymnasium full of chanting students as he walks a red carpet flanked by cheerleaders during his last school day as principal of Nansemond River High School on Friday.

Thomas McLemore has walked into the gymnasium at Nansemond River High School, where he has been principal for 17 years, thousands of times.

But Friday was different. It was his last school day as principal before he retires, and some former students had wanted to plan something special — and keep it a secret. 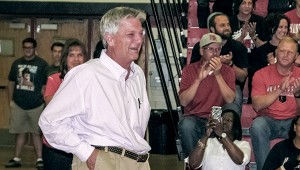 Nansemond River High School Principal Thomas McLemore walks into the gymnasium at the school on Friday and learns there are hundreds of current and former students there waiting to greet him on his last day.

“The man’s a legend,” said Kyle Lippiatt, a 2008 graduate who now teaches at the school. “You don’t have many people that last 17 years in a job and actually care and are pretty universally liked.”

Tears streamed down McLemore’s face as he walked a red carpet through a tunnel of pom-pom waving cheerleaders to center court, where 2006 NRHS graduate Brittany Poe awaited him.

“I’ve always had a really close relationship with him,” Poe said. “He wasn’t just a principal.”

So they decided to throw him one instead. They created a Facebook event and invited students past and present to attend.

“It’s self-explanatory,” Jennifer Dye, Poe’s sister and also an NRHS graduate, said about why they decided to plan the celebration. “The amount of people that are here, it speaks volumes about the type of man and type of principal he was. It speaks for itself.”

After Poe said a few words and turned the microphone over to McLemore for a few words, students formed a line that never seemed to get shorter in order to hug McLemore, shake his hand, give him gifts and wish him well. He greeted attendees for more than an hour. 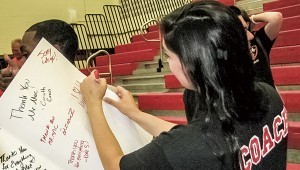 Jennifer Dye, one of the school’s alumni who planned the event, signs a giant card for McLemore.

Many older graduates sported baby bumps or had toddlers in tow. They told McLemore about their spouses, families and careers. Younger graduates reported on their progress in college or jobs.

“I’m just so thankful that most of them have turned out to be great people,” McLemore said. “They’ve started families and jobs, and they’re doing well. That’s what I’m proud of.”

McLemore said one of his former students was a nurse for his grandson, Levi, who was born prematurely. He just turned 1 year old and is doing well.

“T-Mac is the greatest,” said Marquis Mapp, a 2005 graduate. He recalled McLemore’s response when he and a group of other seniors would sometimes come in late after eating breakfast at IHOP.

“He would always turn the other side when we slipped in late,” Mapp said. “He would say, ‘You could have at least wiped the crumbs off your shirt.’”

Jason Kressen, class of 2003, attended the event. His class was the first McLemore saw all the way through at Nansemond River.

“He’s one of the more awesome people I’ve met in my life,” Kressen said. “He cared about every student that came through here, even the ones that didn’t want to be here.”

McLemore urged all of his former students to contact him if they need him.

“If you ever need anything, just call me,” he said. “It was a very tough decision, but I think everyone reaches a point in their lives when they know it’s time.”

McLemore plans to spend more time with his three children and two grandchildren, who were in attendance on Friday.