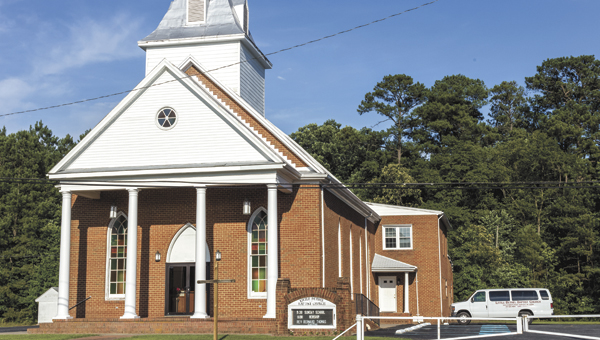 Among the weekend events commemorating Little Bethel Baptist Church’s sesquicentennial anniversary will be the planting of an oak tree on the church grounds, a reflection on the founding of the church, which initially met under an oak tree.

Little Bethel Baptist Church will celebrate its 150th anniversary this weekend with a cookout on Saturday, followed by services on Sunday to commemorate the historic Chuckatuck church.

“It’s a great history,” said Lynette Wilson, co-chair of the anniversary committee. “We were founded just at the end of slavery, so it’s reflective of our past and how far we’ve come.”

The celebration begins on Saturday with a community day cookout, which will include four sister churches that split from Little Bethel.

The day’s events will also celebrate the founding of the church by planting an oak tree on the grounds. Laurna Taylor, the chairman of the anniversary committee, said this hearkens back to the founding of Little Bethel.

“The church used to meet under an oak tree on Everets Road,” Taylor said. Before the church was established in 1866, the congregation used to move from house to house each week for worship, she said.

Taylor said the sesquicentennial anniversary gives the congregation a chance to celebrate the early history of the church.

“We want to celebrate our ancestors and the founders,” she said. “It’s a momentous occasion.”

The church keeps its history alive with several artifacts from its past. Taylor said the church still has a piano and a pulpit set from when the church was built.

The services on Sunday will further celebrate the history of the church.

Wilson said the service will begin by ringing an old bell that is hung in the church’s steeple 15 times to honor the 150 years of the church.

Taylor said that the bell had been there since the church was built. It has been used on special occasions including anniversaries, revivals, funerals and New Year’s.

Elder Felton Whitfield of New Jerusalem Church of God in Christ, a former attendee of the church, will run the first service at 11 a.m. on Sunday. The anniversary service at 2 p.m. will be led by the Rev. Milton Blount of New Mount Olivet Church.

Taylor said the church wanted to use the anniversary as a chance to bring back former members of the church who had moved away or attend other churches.

“Little Bethel is the mother church,” Wilson said, “and we wanted to bring back the sons and daughters.”

Many families have attended the church since it was founded in 1866. Taylor herself is a descendant of the founding trustees.

“My family has been here for generations,” Taylor said. “It’s the only church I’ve ever known.”

When asked why so many people have attended the church for their entire lives, Wilson said the answer was simple.

“It’s love,” she said. “The love for the church and the community and their love of God.”