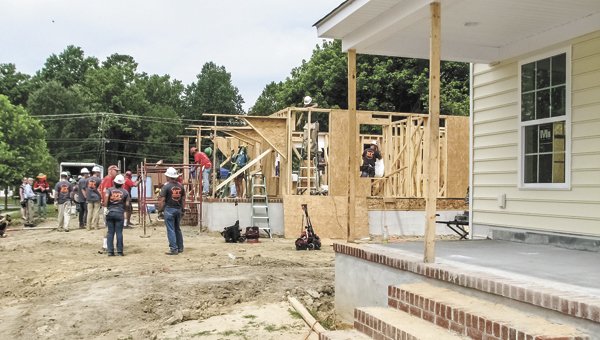 Construction crews work on a Habitat for Humanity home on Lake Kennedy Drive Wednesday, with a completed home in the foreground.

Suffolk resident Rosa Steward said she worries about how to protect her 16-year-old son from drugs and violence in her neighborhood.

Steward, a home health worker, has moved from place to place in recent years, living wherever she can afford. But that’s all about to change thanks to Habitat for Humanity. 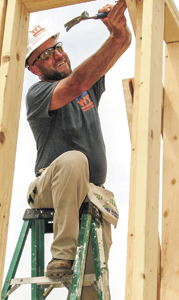 Scott Downey drives a nail in the house under construction.

“He’s more excited about having a house than I am,” the 54-year-old, first-time homeowner said of her son.

By summer’s end, Habitat for Humanity plans to have nine new homes built on Lake Kennedy Drive. Two of them are already ready for families to move in.

The only problem is that Steward and her son are the only family approved to live in one of them so far.

Habitat and city officials held a press conference at the site Wednesday to get the word out about the available homes, as construction on one of the homes filled the air with the sound of nails being hammered, wood being sawed and instructions being shouted.

“Get us some applications,” said Brad Kirkpatrick, executive director of Habitat for Humanity South Hampton Roads. “All of these homes need families, and we’re currently taking applications.”

Kirkpatrick said about one applicant per 10 or 15 applications actually qualifies for a home. It’s a pretty fine line — applicants must have good credit with an income in a fairly small range, enough to pay the no-interest mortgage but not so much that they could possibly afford a conventional mortgage.

The Lake Kennedy homes will be three to four bedrooms each and have an average monthly payment between $650 and $750. Many families pay less for the mortgage than they were paying in rent, Kirkpatrick said.

They also must have an immediate need for safe housing. Many applicants are living in cramped quarters, in transitional housing or in unsafe neighborhoods.

Applicants must also put in 250 to 400 hours of “sweat equity” helping build their own or others’ homes and must complete financial literacy and home maintenance classes. They also must have lived in South Hampton Roads, including Isle of Wight County and Smithfield, for at least one year.

“I am proof that Habitat for Humanity works,” said Malika Traynham, a Habitat homeowner who lives in a refurbished house not too far from the Lake Kennedy site. “It builds families, it builds communities, and it strengthens you financially.”

She said she enjoyed the process of working on her home.

“During that process, you build relationships,” she said. “You’re part of the community before you even move into your home.”

Mayor Linda T. Johnson said on Wednesday that homeownership lifts up the entire community, pointing to a 16-house project Habitat for Humanity completed in North Suffolk’s Huntersville neighborhood in 2008.

“It’s nothing like watching that first-time homeowner take that key, open the door and walk into their home,” she said. “It’s where your children will call home.”

“I cannot thank them enough for what they’ve done in Suffolk,” Vice Mayor Leroy Bennett added of Habitat.

Kirkpatrick said the organization likely needs hundreds of applications to find the right families for the other eight Lake Kennedy homes.

“We need everyone’s help to find families from anywhere on the Southside who qualify for these beautiful houses,” he said. “We know that together, as one community, we can make a difference for those who deserve a special place to call home.”

Visit www.shrhabitat.org for more information on how to apply.

An early-morning call about suspicious activity in the Eagle Harbor neighborhood escalated into a multi-vehicle crash on the James River... read more