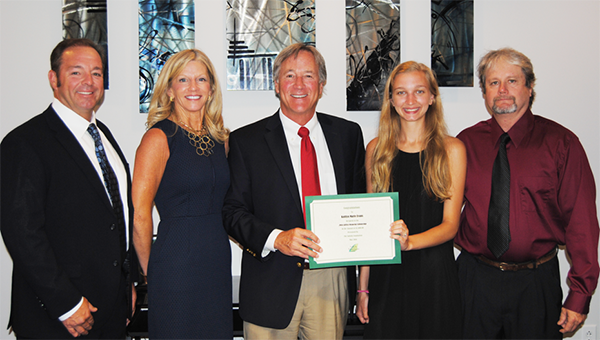 Participating in a scholarship presentation for Kaitlyn Evans are, from left, Allfirst LLC Vice President James Templeton, Wanda Hall, company founder and Chief Executive Officer Les Hall and Evans and her father Dave, who is an Allfirst employee. (Submitted Photo)

Two students from Suffolk have received $1,000 scholarships from a local company whose leader is also the vice president of the Suffolk Foundation and hopes to encourage others to give through the charitable foundation.

Les Hall, chief executive officer at Northgate, is also vice president of the Suffolk Foundation, a nonprofit organization founded in 2006 to help facilitate and develop philanthropy in Suffolk and to make charitable grants on behalf of donors. 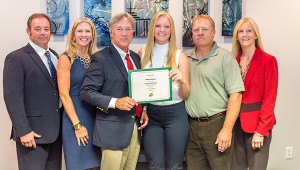 Giving the scholarships through the foundation, Hall said, allows him to take advantage of the organization’s ability to manage financial contributions efficiently and cheaply, and he hopes his donation will serve as an example that other local businesses in Suffolk will follow.

The Allfirst Memorial Scholarship will be given annually to an employee or family member of an employee with a declared intention to pursue or continue a college degree or trade school certification. Applicants must demonstrate involvement in school or community activities and must include an essay about the potential impact of the award along with their applications.

The initial winners, Evans and Gay, both are already attending college.

Evans is a rising junior at Virginia Commonwealth University, where she studies biology and has been on the dean’s list every year.

She is the daughter of Dave and Mary Evans. Dave Evans is a project superintendent at Allfirst and has worked with the company for nearly nine years.

Gay is a rising sophomore at Longwood University, where she plays on the softball team and is studying education and human services.

She is the daughter of Cris and Mary Gay. Cris Gay has been employed at Allfirst for nearly 10 years. He is a head fabricator.

“These are two well-deserving applicants, who, in our opinions, exceed the expectations of our criteria,” Hall stated in a press release.