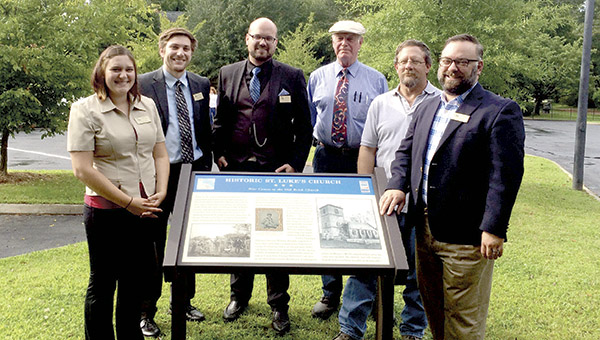 Historic St. Luke’s Church in Smithfield has unveiled a new sign that focuses on the church’s Civil War heritage.

The sign describes the Confederate use of the old brick church during the war, and it signifies the church as a site on the Virginia Civil War Trails map. Todd Ballance, the executive director of the church, said the marker will celebrate a little-known part of history and put the church on the map.

“It shows how much we value the history of the area,” he said. “The church focuses more on 17th- and 18th-century history, showing how we became Americans, but this tells of the struggle to remain Americans.”

The marker was unveiled at a gathering Tuesday night of local business owners involved in tourism. The invitees gathered for food and drinks after the ceremony, while Ballance described the importance of the marker.

The sign describes how the historic site was a campground for the 13th North Carolina Infantry Regiment, which used the church from 1861 to 1862. The sign is a trail marker for the Virginia Civil War Trails, an organization that maps out historic Civil War sites all around the state. Ballance hopes the new marker will attract more tourists to the area.

“It’s a sinew that connects the other Civil War trail markers with those here in Smithfield,” he said. He added that Civil War aficionados could use the trail to take a road trip that starts in Norfolk and loops all the way to Williamsburg.

Joseph Tapia, the church’s marketing coordinator, agreed that the connection could increase tourism.

“We’re part of this bigger narrative now,” he said. “This area already gets so many tourists seeking genealogy and the stories of the past. This gives them another way to access that.”

The church previously had a Virginia Civil War Trails sign on the property, but it was removed nearly 10 years ago because it did not fit the interpretation of the church, Ballance said. He said the church decided to be part of the trail system again, and it embarked on the six month process to obtain the sign.

Albert Burckard, the secretary of the Isle of Wight Historical Society, said the process was easy. He said the church had to prove the historical events and create a draft for the sign.

Burckard was one of many historians who contributed to the creation of the sign, and he said the final product is one to be proud of.

Tapia said the new sign is just one way the church is hoping to increase its historical profile.

“We want to show the world our history in any way we can,” he said.