‘Time to hand it off’: Gallery changes ownership 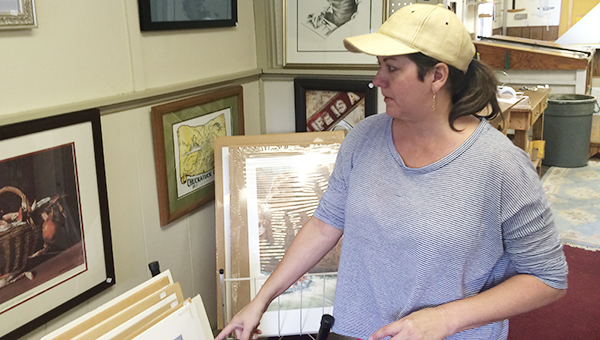 Marlene Nierman, manager of Crittenden Gallery and Frame Shop, displays the effect a good frame can have on a work of art. Nierman took over as manager in April.

Tucked away in a small building at the edge of Eclipse Drive is Crittenden Gallery and Frame Shop. The shop has offered framing options and promoted local artists for more than 30 years, becoming an important part of the village of Eclipse.

But the deep-rooted traditions of even the oldest communities are subject to change.

After more than 25 years in the hands of Ernest Cooper, Crittenden Gallery was sold earlier this year to retired army Col. Scott Bisciotti.

Bisciotti hired Marlene Nierman to manage the business and continue its tradition of quality.

Nierman came in to manage the business in April. She had no experience with framing, but the shop’s former owner was willing to help.

Though Cooper is 74 years old and semi-officially retired, he still comes in three days a week to frame art and answer questions.

“I couldn’t walk away and let it die,” he said. “I want it to be even more successful than when I was the owner.”

Cooper has been working at the shop since 1979. He bought the business in 1989 and created a consistent local clientèle.

Cooper said he spent so much time in the business because he loves the work he does.

Cooper has been working at Crittenden Gallery and Frame shop since 1979. He bought the building from his mentor, Robert Markland, in 1989 and took over the business.

The business was easy to get into, especially with a teacher as good as Markland was, Cooper said.

After owning and operating the business for more than 25 years, he decided to sell the shop earlier this year.

Though he’s no longer in charge, he still gets to share his expertise with Nierman and help customers.

Though Cooper has been in the business for more than 30 years, Nierman is the first apprentice he’s ever taken. Cooper says she’s done extremely well with the limited time she’s had.

“She’s got all the right qualities to be great,” he said.

Nierman says framing is an underappreciated art. A good framing job can make a huge difference in the presentation of a piece of art, she said.

“The first thing a good frame does is preserve the art,” Nierman said. “The second thing is enhance the beauty.

She said framing and running the business had taken over as her passions.

“It’s wonderful,” she said. “I love it. It’s unlike anything I’ve ever done before.”

Cooper said he wants to leave the shop in good hands, because the community needs it.

“Communities need independent business to succeed,” he said. “I enjoyed working here because of the people. The people in Crittenden and Eclipse are the best in the world.”