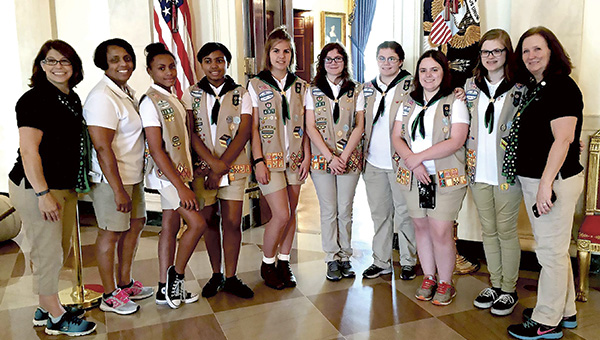 A rare group visit to the White House was combined with a promotion ceremony to give a group of North Suffolk Girl Scouts an unforgettable experience recently.

Members of Girl Scout Ambassador Troop 431 followed a visit to the White House in June with a “bridging ceremony” at a nearby park.

A bridging ceremony commemorates a troop’s graduation to the next rank of Girl Scouts. The majority of Troop 431 was graduating to ambassador, the highest possible rank.

“This is a remarkable feat — not many [girls] stay in the program this long,” said Shellie Whear, one of the troop leaders.

Typically, the troop would host its ceremonies at nearby state parks. But, the troop leaders wanted to make this particular ceremony special.

So the leaders reached out to Rep. J. Randy Forbes (R-4th) to request tickets to visit the White House. A few months later, the troop’s request was approved for June 4.

“A lot of the girls were pretty excited about this,” Whear said. “They are all aware of politics and how the country is governed.”

After an extensive tour of the White House, the bridging ceremony took place at Lafayette Square in President’s Park. Many of the girls are fans of the hit Broadway play, “Hamilton,” which features the Square as the backdrop in one of its scenes.

“It was a really neat experience — there was so much history there,” said Erin Hough, a member of Troop 431.

After the ceremony, the troop went on to visit the Smithsonian Institute, the Spy Museum and several other landmarks in the nation’s capital.

Whear said it was one of the most memorable experiences she and the girls have shared.

The troop, hailing out of North Suffolk, has been engaged in the community for the last several years, taking on projects ranging from cooking for the homeless to working local running events.

Phyllis Grady and Whear took over as the troop leaders in 2010 and are proud of how hard the girls have worked through the years. Both have daughters in the troop, as well — Tara Grady, 16, and twins Erin and Megan Hough, 16.

“They are a really great group of girls. They are one of the best groups I’ve had the pleasure of working with,” Whear said.

Next on the agenda for the girls is to achieve the Gold Award, the highest award given in Girl Scouts. Earning the Gold Award requires hours of identifying, researching and executing projects to tackle issues in the community.

“I feel [the Girls Scouts] is really beneficial, and it is definitely something I recommend to any young girls out there,” Erin Hough said.

Police are seeking the identity of two suspects who robbed a restaurant Wednesday night. Police are investigating an armed robbery... read more