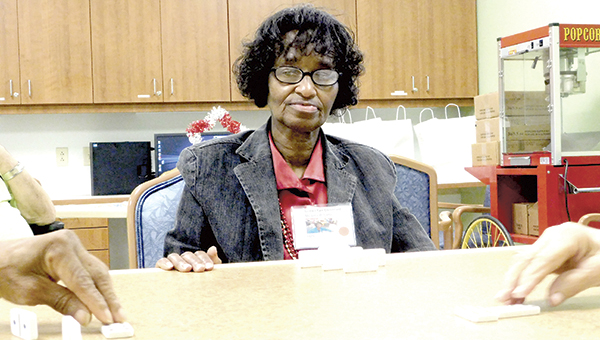 Loris Williams, a participant in the Sentara PACE program, plays dominoes with her friends during a recent morning at the program, which is celebrating its 20th year this year.

Sentara Healthcare, one of Hampton Roads’ largest health care providers, is celebrating the 20th anniversary of its PACE program during July.

To date, there are 133 Program of All-Inclusive Care programs nationwide, with eight in Virginia alone.

Since 1996, PACE has served the health needs of nursing home-eligible seniors in the Hampton Roads area. The program currently assists more than 260 participants combined at its Norfolk and Portsmouth sites.

“PACE provides one solution, providing participants with some extra help while allowing them to remain in their own homes,” Bruce Robertson, president of the Sentara Life Care Seniors division, said in a Sentara press release.

This program follows an “age-in-place” model, according to Sentara spokesman Dale Gauding.

A similar program in California, which was located in a predominantly Asian community, originally inspired the program, according to Suzanne Coyner, the Portsmouth PACE program director.

Asian families typically try to keep their elderly members in the home as long as possible. Sentara ran with this concept and applied it to the health care setting, birthing the PACE program.

Each month, Sentara receives funds from Medicaid and Medicare to provide for participants. The sites use these funds to sustain their services, supplementing with their own dollars if necessary.

Sentara chose to adopt the program in Norfolk and Portsmouth because those areas are underserved, Coyner said.

The PACE staff works tirelessly to prevent its participants from being re-admitted into emergency care by taking precautionary measures. According to Coyner, the Portsmouth PACE branch, located on Churchland Boulevard, has re-admission rates as low as 5 percent, compared to some area assisted living facilities with rates between 15 to 18 percent.

To qualify for the PACE program, participants must be at least 55 years old, they must be nursing-home eligible and they must be “safe in the community,” which is defined by Sentara officials as meaning participants are in stable living conditions.

The Norfolk and Portsmouth sites offer a variety of services all under one roof, including physical therapy, rehabilitation and medical treatment. The program also offers transportation to and from the facilities and meals for its participants.

“It’s been a blessing for me,” said Loris Williams, 71, a participant at the Portsmouth facility.

Williams lives with her daughter in North Suffolk. About three years ago, her son, Robert, brought the PACE program to her attention. The family agreed to participate to keep Williams busy and safe as her children worked their full-time jobs.

At the center, Williams enjoys using the exercise bicycle machines in the rehabilitation room, along with singing and playing dominoes with her friends.

Coyner believes the PACE program has made great strides in the last two decades but feels there is still room for improvement.

“We hope to find better ways to discover new clinical initiatives for our participants,” Coyner said.

For more information on PACE, visit www.sentara.com/seniors or call 736-4677.