A companion for Molly 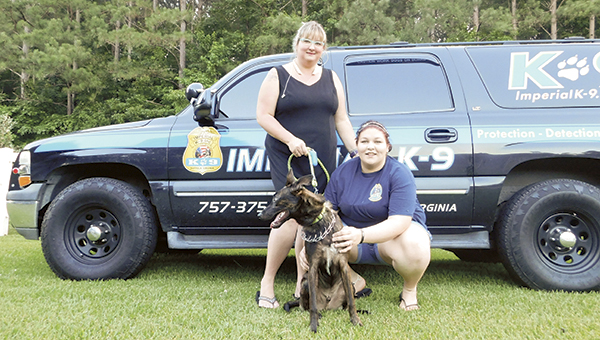 Stephanie and Molly Cox and Apollo “paws” for a photo at the Imperial K-9 S.T.A.R. Puppy training graduation. Apollo will be a service dog for Molly Cox, who battles epilepsy, PTSD and depression.

In the midst of graduation season, a local dog kennel had one of its own on Thursday.

Nine dogs were graduating from the Imperial K-9 six-week STAR Puppy program. Among the bunch was Apollo, whose owner is 18-year old Molly Cox.

Cox battles with two forms of epilepsy and post-traumatic stress disorder. Her symptoms were so severe she was forced to be homebound for more than three years.

“I have gone through so much the last couple of years with my conditions,” Cox said.

As a result of being isolated, Cox sunk into depression. Her mother, Stephanie, had been tirelessly searching for options to help her. She eventually decided to look into getting a service dog. Imperial K-9 happened to be one of the only centers in the area that trained such dogs.

But the cost for the dog was expensive. The family had to raise at least $5,000 for the dog, training and veterinary costs. Molly’s expensive medical bills had already greatly depleted the family’s finances. Therefore, fundraising was the only viable option to afford the service dog.

Stephanie began a GoFundMe page last November. To date, the page has been shared more than 500 times and has raised more than $3,500.

The family was grateful for the contributions.

“It was surprising, yet heartwarming to see that such a large amount of people cared for [Molly], despite her being isolated,” Stephanie said.

Despite being $1,500 short, the family decided to purchase the service dog.

The dog, a Dutch shepherd, was one of Major’s pups. Major, one of the first dogs at the Imperial K-9 kennel, was a military dog and served two terms in Afghanistan.

Molly decided to name her dog Apollo. In Greek mythology, Apollo is the god of music and sunshine. Molly is a huge fan of music, and, due to Molly’s episodes of depression, her mother often joked that she needed some “sunshine” in her life.

“[Apollo] feels like a family member. and there have definitely been noticeable changes in Molly,” said Stephanie.

Even though he hadn’t been expertly trained yet, Apollo had an immediate connection to Molly. During times when she had experienced seizures, Apollo would do his best to comfort and protect her until help arrived.

“It’s so comforting to have [him] as a best friend,” Molly said.

Imperial K-9, now in its fourth year, has quickly become one of the most respected kennels in the area.

Smooth and efficient operations at the Port of Virginia facilities in Hampton Roads can be hindered by any number of... read more