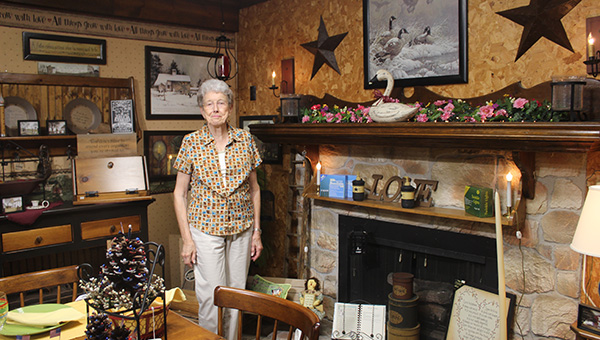 Joan Parsons Mayo shows off part of the Knot Hole Station shop in Driver. Mayo opened the shop in 1976, so it is celebrating its 40th anniversary this year.

In the struggling village of Driver, The Knot Hole Station has endured 40 years of challenges and success. Promoting country living, the Knot Hole is full of comfort for every person and every home.

Joan Parsons Mayo, who recently turned 80, has been there the whole time. But before opening the shop in 1976, she was a bookkeeper for a dental business and had spent several years at the Driver Elementary library.

“I liked what I was doing, but I just felt like I wanted to do something different,” Mayo said recently. “I was always sewing and doing crafty things, and I had the opportunity to rent that little building across the street.”

“I did all the sewing; I made all the handmade items,” she said of the store’s original specialties.

Later, as the business grew, Mayo would have someone come help with the work. Eventually the focus turned to furniture.

A few years after she opened the store, the front part of the building it now occupies became available. The original portion of the building was the local trainmaster’s home. Before her husband died, they bought the new building and extended it.

Today, Mayo’s son, Ken Parsons, makes the wood furniture she sells, except the dining room tables and chairs. Parsons can personalize the furniture, adjusting pieces and making most anything. Orders come in two to three times a month and can take four to five weeks for him to complete.

The best sellers are the furniture, the accessories and the pictures, Mayo said. Country is king.

“Country living to me is making something extremely comfortable to look at and to be in the environment,” she said.

Driver has faced many challenges — special among those challenges the closure of the Kings Highway Bridge in 2005 and the tornado in 2008 — but the community is closeknit.

“I love my customers, I love the people,” she added, noting that she has some customers dating back to when the store first opened and others who tell her their mothers brought them in as children.

“I still see such potential in Driver and believe that we will see people coming back that have been away for years,” she said. “You know what they say, everything old is new again.”