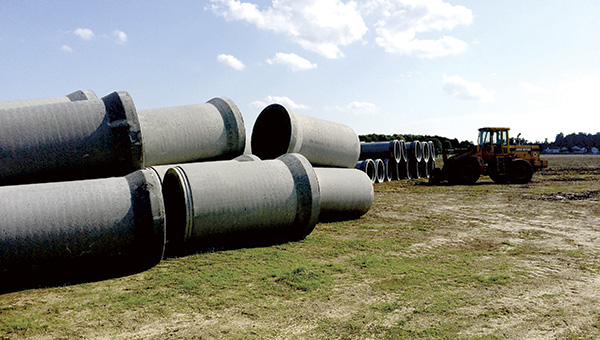 New stormwater drainage pipes wait to be installed at a future housing development off Godwin Boulevard.

Planters Station LLC will develop the neighborhood, also to be named Planters Station, off Godwin Boulevard near its intersection with Kings Fork Road and adjacent to King’s Fork High School.

Work on the stormwater system already has begun, Overton said, and all of the site work should take a total of eight months. Homes should start to go up in 2017, with the first phase including 52 homes and four subsequent phases planned.

“I would hope the model center would be open in the spring of next year, and once homes are bought, we would start building them,” Overton said. “With that many lots, it’s going to be a multi-year development.”

Common areas, including playgrounds, are planned throughout the development. A homeowners’ association also is planned.

The homes will range from a little less than 2,000 square feet to a little more than 3,000, with three to five bedrooms, Overton said. The price range starts in the high $200,000s.

Overton said about 10 acres of commercial space fronting Godwin Boulevard also is planned as part of the development.