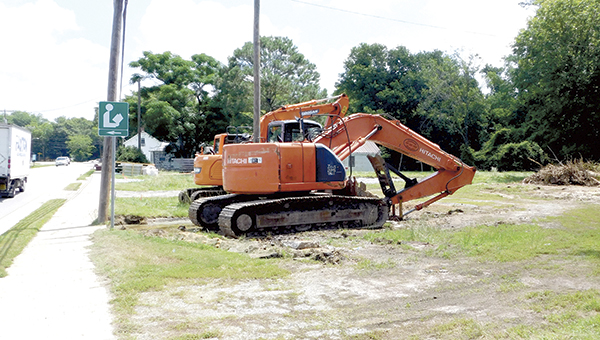 Construction equipment prepares for site work on a roadside lot in Chuckatuck where a Dollar General store is planned.

The vacant lot across from the Chuckatuck Public Library on Godwin Boulevard has recently raised some eyebrows.

The grass lot was once occupied by a gas station. Since, then there has been no activity or construction at the site for several years.

However, within the last few weeks, two cranes and various construction supplies have occupied the space. Billy Chorey Sr., owner of real estate firm Chorey and Associates, said a Dollar General would be built on the lot.

“This will be a good location for the people of Chuckatuck,” Chorey said. “They no longer have to travel all the way to downtown Suffolk for groceries.”

Rheston Companies Inc. will head construction on the lot. Rheston has submitted plans for construction and is slated to begin in the coming weeks, according to Kevin Hughes, Suffolk’s economic development director.

The lot spans a little less than two acres and has been classified as a general commercial zoning, so the store did not require any public hearings for a rezoning.

Hughes expects construction to be complete by next summer.

“I feel this going to be a nice store for Chuckatuck,” Chorey said.