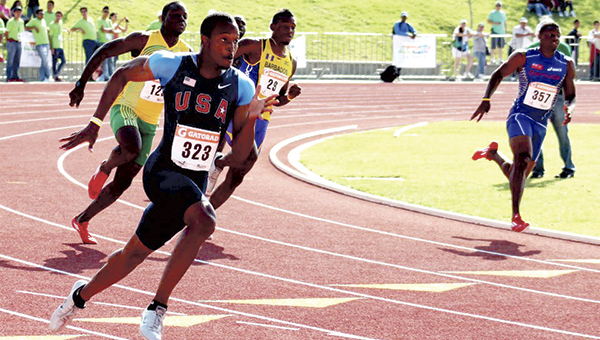 Keith Ricks competes in the 200-meter race during the 2012 North American, Central American and Caribbean Athletics Association track championships in Mexico. Ricks recently re-aggravated an old injury and was not able to participate in last week’s U.S. Olympic Trials in Oregon. (Courtesy of Keith Ricks)

Keith Ricks is a man set on his goals. That means that even though an injury made him lose out on his chance to participate at the 2016 Olympic Games, he remains positive.

“For me, it’s been pretty positive,” he said. “It’s not necessarily the end of the road. I have the world championship next year, which is what I’m focusing on now.”

Ricks, a Suffolk native and graduate of King’s Fork High School, had booked a place at the Olympic trials this week in Oregon. However, the world-class track runner had to withdraw from the competition after re-aggravating a hamstring injury that had plagued him since February.

“It happened initially during the indoor track season,” he said, “I trained through it and tried to race a couple times, but it kept nagging at me.”

The 25-year-old Ricks participated in the 2012 Olympic trials, reaching the semi-final of the 200-meter race in the event.

Ricks was booked to run two different races in the 2016 trials: the 100-meter and the 200-meter. He said he was able to focus equally on both events, even though most track runners focus on a single race.

“It’s not too hard to train both,” he said. “Though it gets a little challenging when you have to run both in the same weekend.”

Ricks joked that he really should be running the longer 400-meter race because of his body type, but he said the shorter sprints came more naturally to him.

Though Ricks won’t be able to participate in the events, he said he will still be watching and cheering on fellow Hampton Roads native LaShawn Merritt.

“We’re from the same area, so I always root for him and hope he does well,” he said. “We would be racing together in the 200,” he said. Both Ricks and Merritt participate in the 200-meter event.

Ricks said his focus for now is getting back up to 100-percent fitness to participate in the world championships.

“I’m trying not to get hurt again,” he said. “You can’t run fast if you’re injured.”

Ricks said he had hoped to be able to post 100-meter times under 10 seconds, which he says would be fast enough to compete with the best in the country.

“You can see where the other guys stand, and sub-10s would make the Olympic games,” he said.

Last month, Ricks, who works at the North Suffolk Dick’s Sporting Goods store, participated in field day at Kilby Shores Elementary School, teaching them different events and the importance of fitness. He said the experience was a great way to give back and hopefully motivate others to work as hard as he has.

“I would say the best advice is to always have a dream and build on it for your future goals,” Ricks said.

As for Ricks, he will keep building for his future, too.

“It’s far off,” he said, “but who knows what will happen in four years?”

By Henry Luzzatto Correspondent More than 3,000 miles away, soccer’s greatest players face off in the final of the UEFA... read more