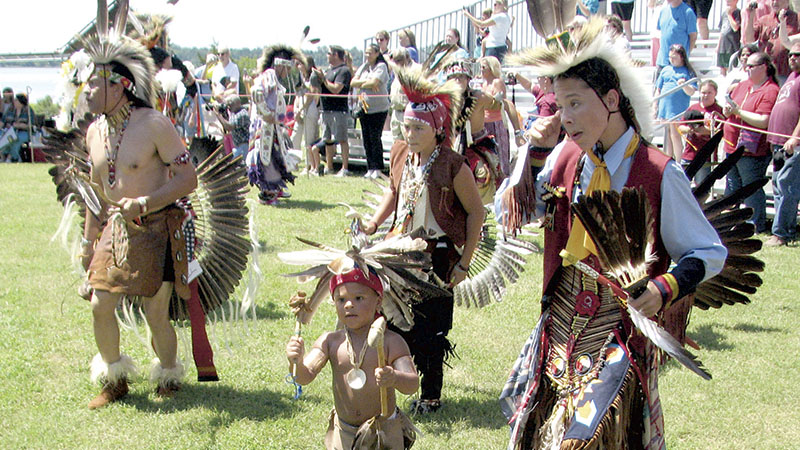 Dancers of all ages enter the dance circle at last year’s Nansemond Indian Tribe powwow. This year’s event is coming up this weekend.

The annual Nansemond Indian Tribe powwow will take place this weekend on the tribe’s Chuckatuck land, and there is plenty to see of the emerging Mattanock Town village.

“People should come out and know that the Native American heritage is still alive and functioning,” Chief Earl Bass said. “We haven’t ever gone anywhere. We’re still here and still trying to keep our heritage alive for future generations.”

The preparations for the Mattanock Town village will be on display, including longhouses and a trail about a mile long through the woods.

The city transferred the land, formerly part of Lone Star Lakes Park, back to the tribe in 2013. The tribe believes, based on historical research, that its ancestors had their village on or near the site.

It plans the Mattanock Town village to be an authentic replica of what a Nansemond village would have looked like in the early 1600s, before European settlers arrived in the area and caused the tribe to disperse.

Food sales at the powwow will benefit the tribe’s efforts. Indian tacos and fry bread will be available, as well as items such as hamburgers and hot dogs.

Smoky River and War Paint will provide the music and singing, Bass said. Kay Oxendine is the mistress of ceremonies, and Ree and Dwayne Davis will be the principal dancers.

Dancing is the primary entertainment at the powwow, and the audience is invited to participate in some of the dances. A number of authentic Indian crafts and displays are available for purchase and for educational purchases.

The Suffolk Department of Parks and Recreation co-sponsors the event, and there is no admission charge.

The powwow grounds are located at the end of Pembroke Lane, which runs off Godwin Boulevard directly across from Oakland Elementary School.