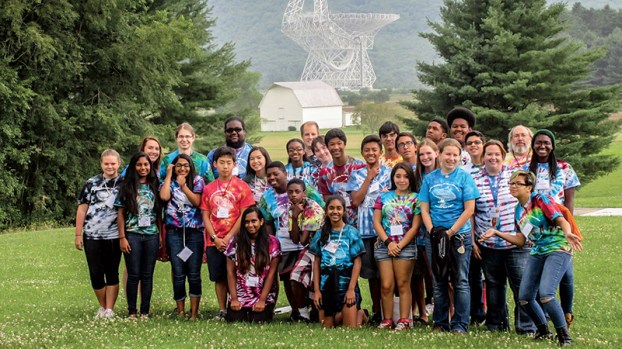 Dorhett Kolipano and Noah Hill heard about the program through fliers distributed by their science teachers.

In 2014, Physicists Inspiring the Next Generation, a program started by the National Radio Astronomy Observatory, was formed to expose minority students to physics and radio astronomy.

“Minorities and women are underrepresented in the STEM fields,” said Sue Ann Heatherly, senior education officer at the observatory.

The program selected 20 rising ninth graders, 10 boys and 10 girls, from around the country to visit the facility in Green Bank, W.Va. All expenses, except some travel, were covered by the NRAO.

Despite being a stellar student, Kolipano was “kind of surprised” she was selected for the program. She had applied for other summer programs and got rejected and did not expect to get into the PING program.

During the program, students learned about electronic soldering, computer science and other physics and radio astronomy topics.

The students were divided into groups and were given specific topics to research. The groups used the facility’s 40-foot radio telescope, the largest fully steered telescope in the world, according to Heatherly.

Kolipano’s group researched the intensity of various objects in space, while Hill’s group studied radio waves and other forms of radiation emitted by the sun and moon.

Students also learned the importance of teamwork and collaboration by engaging in a variety of team building exercises.

There were plenty of challenges for the participating students, but one of the biggest was having limited access to family.

In order to restrict interference with the facility’s radio telescope, cellular devices could not be used. Therefore, students were granted limited access to communication over the course of the program. However, Kolipano’s family was not worried.

Hill was not fazed by this impediment.

“He doesn’t have a smart phone yet, so it didn’t bother him too much,” said Susie Hill, Noah’s mother, with a laugh.

The work itself was also challenging.

“For the first time in my life, I felt like I didn’t know what I was doing,” Kolipano said.

Heatherly agreed the program was challenging but it was worthwhile for the students.

“The program challenges them and shows their potential,” she said. “It is very busy and very intense. But when you do something kind of hard, it sticks with you forever.”

In the afternoons and their free time, the students engaged in outdoor activities such as swimming, hiking and biking.

“The 2016 group was pretty awesome and very lively,” Heatherly said.

Kolipano and Hill both enjoyed the program and aspire to be astronomers.

“It was great, fun and gave me a new perspective on some parts of life,” Hill said.

Members of last year’s program had the opportunity to meet President Obama during the White House Astronomy Night event in October.

Pass rates on state standardized tests in Suffolk Public Schools edged up in almost every subject area while falling only... read more