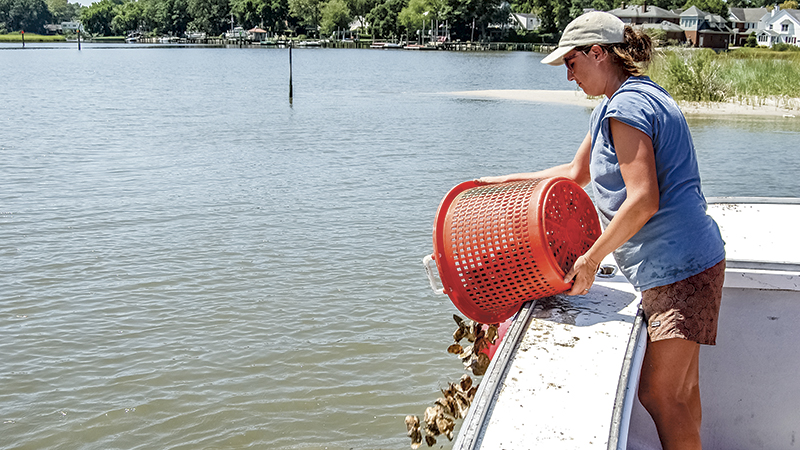 Jackie Shannon, Virginia oyster restoration manager for the Chesapeake Bay Foundation, dumps recycled oysters into the Lafayette River in Norfolk as part of its Save Oyster Shells program.

A North Suffolk restaurant has joined a program working to improve the conditions of the Chesapeake Bay.

River Stone Chophouse, located on Harbour View Boulevard, is the first Suffolk restaurant to join the ranks of the Chesapeake Bay Foundation’s Save Oyster Shells program.

However, the foundation is still looking for volunteers to help collect oyster shells at the restaurant.

The program, which started in 2005, was implemented to help improve the water quality of the bay. Staff and volunteers collect empty oyster shells and recycle them to repopulate the waterway with more oysters.

Since the program started, the foundation has contacted restaurants, schools and other facilities to serve as drop-off locations for oyster shells.

To date, there are more than 30 participating restaurants and eight drop-off locations for shells in the Hampton Roads area.

Heather North, Virginia oyster restoration specialist with the foundation, said the community has been a great help.

“They love it,” North said. “It doesn’t cost them anything or any inconvenience.”

The foundation collects shells from the restaurants and other locations and transports them to its Gloucester facility. The shells are then cleaned and placed into large water tanks with millions of microscopic oyster larvae, referred to as spat.

The larvae attach to the shells and the young oysters are then dumped back into the Chesapeake Bay. According to North, a single adult oyster can filter more than 50 gallons of water a day.

Within the last six years, staff and volunteers have placed more than 60 million oysters into the bay.

Currently, the foundation is focusing its efforts in the Lafayette River in Norfolk. According to North, the recycling project has greatly reduced the bacteria levels in the river, which was once deemed unsafe for recreation due to contamination.

The oyster reefs also provide a “good habitat for fish and other marine life,” said Kenny Fletcher, Virginia communications coordinator for the foundation.

North hopes the program and similar oyster recycling programs will become as commonplace as recycling for plastics.

“I want to have every restaurant that sells oysters to give to oyster recycling programs,” North said.

For more information about hosting an oyster shell recycling station, contact North at hnorth@cbf.org or at 632-3804.