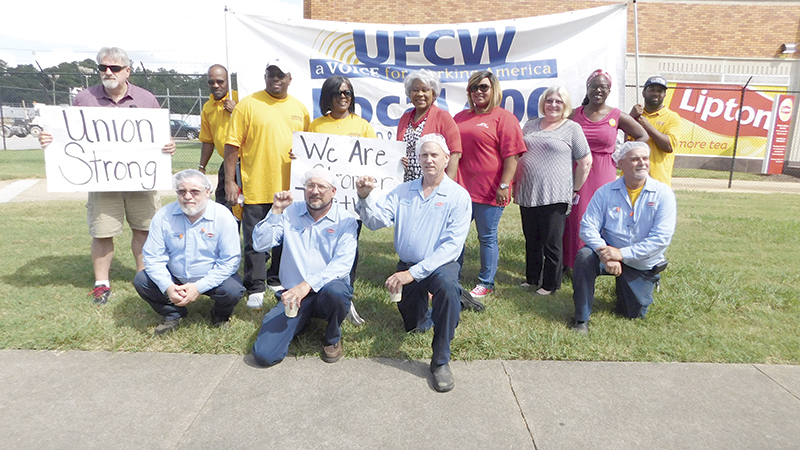 Lipton employees are joined by Sen. L. Louise Lucas and union officials at the press conference outside of the Lipton facility on West Washington Street.

Lipton employees voted last week to form a union in response to what they called unjust working conditions and treatment.

Within the last decade, the plant began taking away benefits such as sick leave from employees and forced them to work overtime, according to Alvin Brown, a Lipton employee for more than 20 years. Many workers were required to work up to 12-hour shifts for as many as 13 days in a row, he said.

“Management kept saying that it was corporate-wide,” Brown said at a press conference held outside of the Lipton facility. “But we discovered it wasn’t.”

Earlier this year, a handful of employees called on the United Food & Commercial Workers Union to organize a union at the facility. Last week, 108 of the plant’s 200 workers voted in favor for the union, according to Lipton employee and union organizer Philip Surace. Seventy-nine employees voted against joining the union.

The employees demanded an end to the involuntary overtime practices, along with better health care, sick leave and other workplace policies.

Moving forward, the workers will negotiate their first union contract with Unilever, Lipton’s parent company. Once this happens, the contract proposal will be presented to the entire workforce to vote upon. The agreement will be effective once ratified by the majority of the employees.

However, the contract does not require employees to join the union to receive its benefits and protections. This stems from the commonwealth’s “right to work” law.

Just prior to the union’s press conference, the plant had removed its involuntary overtime drafting policy, according to Brown.

“I wanted to make sure that they knew there are people in the legislature that care about the Lipton employees making a living wage,” Lucas said. “People are struggling to make ends meet, and these are issues we are confronting as a nation. This is a major breakthrough for the facility’s employees.”

The Suffolk facility is the only Lipton tea manufacturing plant in the country. The plant has operated for more than 60 years and produces nearly all Lipton tea sold in North America.