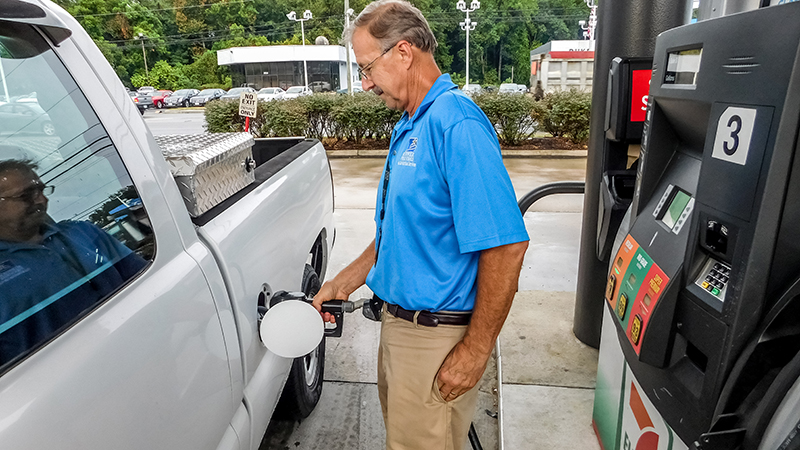 Robert Morris fills up his tank at a local 7-Eleven gas station. Commuters saved at the pump this summer, with the lowest summer gas prices in 12 years, and could save even more in the near future.

With a tropical storm affecting the East Coast this Labor Day weekend, gas prices are predicted to fall.

Laskoski believes the lowered prices would be a result of less commuter traffic due to the anticipated weather conditions.

For the last decade, Virginia has experienced a gradual declining trend in gas prices.

Statewide prices have decreased from close to $3.05 per gallon to about $2 today. In mid-2008, prices peaked at just below $4, and its lowest mark was in the fall of the same year at $1.48, according to GasBuddy.com, a website that helps consumers find cheap gas around the country.

Motorists nationwide have enjoyed the cheapest summer gas prices in 12 years. Since last summer, consumers have saved more than $18.9 billion.

Since 2005, data trends show national Labor Day gas prices are typically lower than the summer national average. However, within the last month, Virginia gas prices have increased by 10 cents due to a rise in crude oil prices in August, according to Laskoski.

However, commuters are paying close to 18 cents less than what they did last year, according to Laskoski.

“It keeps going up and down, but it is a lot better than what it once was,” said commuter Mary Farrow.

The reason for the lower gas prices over the years has been a result of rampant oil production. In this case, the supply has outweighed the demand, which has forced companies to decrease oil prices.

Saudi Arabia was a key factor in driving down prices by pumping heavy quantities of oil in late 2014. Once sanctions eased in Iran, the country also began to boost oil production, which caused prices to fall even more, according to a GasBuddy press release.

For Labor Day, prices are expected to be $2.19 per gallon, which is a slight decrease from the current national average at $2.22. Currently, the state average is $2.01 per gallon.

For the remainder of the summer, the national average is expected at $2.24 per gallon, compared to last year’s $2.70.

As the summer driving season comes to a close, gasoline demand and prices are expected to fall once more. By mid-September, cheaper winter gasoline will return to the pumps, according to a GasBuddy press release.