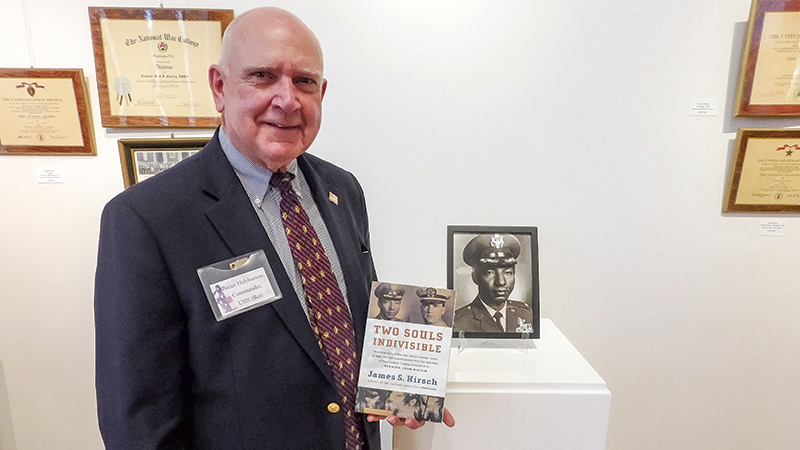 Lt. j.g. Porter Halyburton, a Vietnam veteran, poses next to a photo of his comrade, the late Col. Fred Vann Cherry. Both men were held captive as prisoners of war during the Vietnam War.

During the Vietnam War, a unique relationship blossomed between a black Suffolk native and a white Davidson, N.C. native. The Suffolk Center for Cultural Arts had the privilege of hosting one of the men on Thursday evening.

The center is displaying the Vietnam Combat Art Exhibit this month as part of a series of programs honoring servicemen and servicewomen.

“Each piece represents emotional happenings,” said Jackie Cherry, the center’s executive director. “It’s been an amazing experience. There was a real hunger for something like this, and the response has been tremendous.”

Lt. j.g. Porter Halyburton was in attendance to sign copies of “Two Souls Indivisible,” a book highlighting the unique relationship between himself and the late Col. Fred Vann Cherry, a Suffolk native. Cherry’s family also attended the event.

For more than seven years, Cherry and Halyburton were held captive as prisoners of wars. The Vietnamese had imprisoned the men together in hopes of igniting conflict.

However, the contrary happened.

“He had such an impact on my life,” Halyburton said. “He was my brother.” 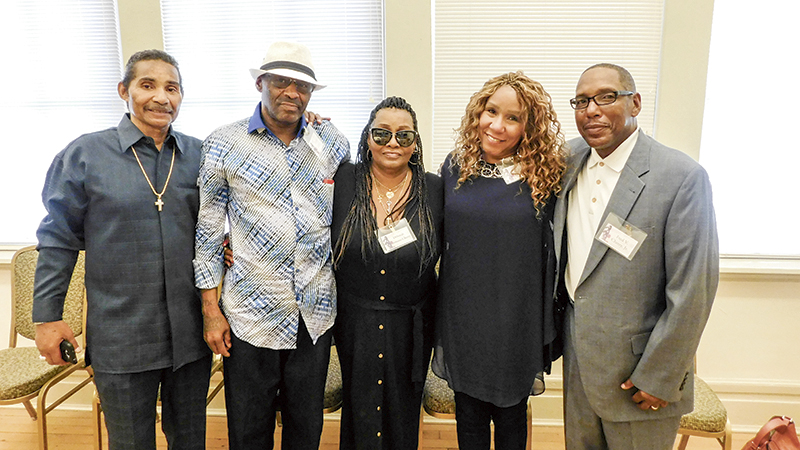 The children of the late Col. Fred Vann Cherry post for a photo during a Thursday event at the Suffolk Center for Cultural Arts. From left are Frederick Cherry, Donald Cherry, Deborah Clemons-Cherry, Cynthia Leon and Fred V. Cherry Jr.

The duo’s relationship continued for more than 50 years, until Cherry’s passing in February. He was 87 years old.

Halyburton was honored to be invited to the event.

“I get to honor a very dear friend of mine, and I get to meet the folks from his hometown,” he said.

Cherry’s five children all agreed their father was a man of national pride and integrity.

“There wasn’t anything he wouldn’t do for his country,” said Cynthia Leon, one of Cherry’s daughters.

“His word was his bond,” said Deborah Clemons-Cherry, another of his daughters.

The evening concluded with remarks from Halyburton and a concert from the U.S. Army Training and Doctrine Command Band.

Next Thursday, Sept. 15, the center will host retired U.S. Navy Adm. William E. Gortney at 7 p.m. During his 39-year career, Gortney commanded at every level in the Navy and was recognized with multiple awards.

On Sept. 22 at 7 p.m., “Thao’s Library” will be the featured film. The heart-touching movie inspired by a young Vietnamese survivor will be followed by a question-and-answer session with the film’s director of photography, Stephen Katz.

The center’s program is an effort to show gratitude for the country’s armed forces veterans.

“This is part of saying thank you for what they did,” said Sandy Hart, Jester’s sales manager.