Nansemond River High School senior Ariana Samuel was voted the Suffolk News-Herald/Duke Automotive Player of the week for a performance that helped lead the Lady Warriors to a two-game sweep over their field hockey opponents the week before last. 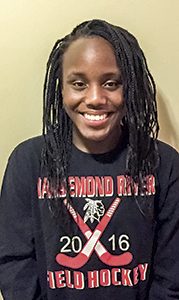 Samuel scored four goals and assisted on two during those games.

Helping the NRHS team overcome rivals King’s Fork and Hampton resulted in Samuel being nominated for the honor.

In the game against the Lady Bulldogs, the Lady Warriors won 6-0, with Samuel completing a hat trick. In a 13-0 victory against Hampton High School, she scored one goal and assisted on two.

Samuel is in her senior season for the Lady Warriors. She is one of three co-captains on the team, and she finds a way to push herself every game to help her team get a win.

Recently in an overtime win against Grassfield, the Lady Warriors leaned heavily on Samuel. They won 3-2, and she scored all of her team’s goals, including the game-winner. She had another game-winner back in September against Western Branch High School.

In all her success, she gives credit to her teammates, who she said make it easy for her to get opportunities to score.

Her role on the team is to help create movement in Nansemond River’s attack and pass and to finish strong. Consistency has been a great theme to Samuel’s play this year.

“I remain consistent because of my teammates,” Samuel said. “They are always giving me great passes throughout the field, and they are always setting me up to score.”

Samuel’s senior season has seen she and her teammates grow close. Coming into the season, she didn’t have any specific goals; she just wanted herself and her team to be better than they were last year.

The Lady Warriors are excited that Samuel is being recognized for her hard work.

“She is a great friend and an even better teammate,” Ashlyn Rogers said of her teammate. “Ariana is really encouraging and always knows how to pick up the team. She leads by example and is hard working and very determined. It’s nice that she won this award and our community has recognized her for all her hard work.”

During each of her four years, Samuel worked to improve her game. Seeing other people get better motivates her to be better, too, she said. She describes herself as someone who is willing and determined.

For next year the senior has committed to play field hockey at Christopher Newport University in Newport News. Though she has not decided on a major yet she plans to choose between accounting or pre-physical therapy.

In her spare time, she likes to support other Nansemond River sports teams with her friends and to volunteer in and out of school.

For now, Samuel and the Lady Warriors still have work to do as they prepare for Conference 10 tournament play, which starts this week for Nansemond River.