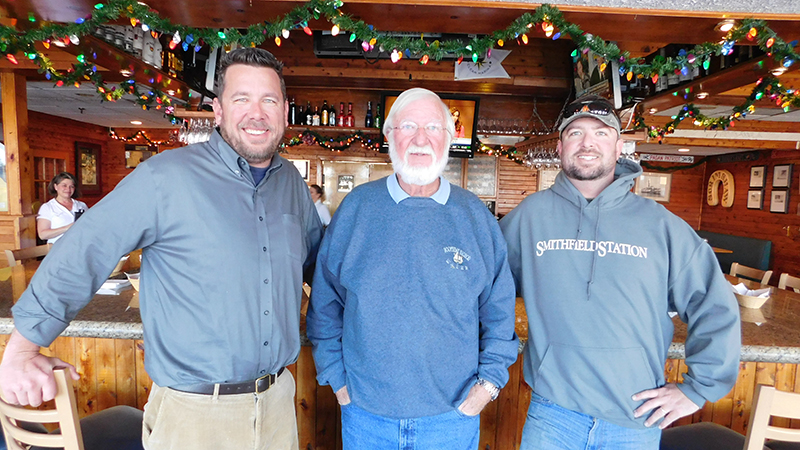 From left, Smithfield Station owners Randy, Ron and Brian Pack are excited about the restaurant celebrating 30 years in business.

“The town of Smithfield has embraced us. I can’t say enough nice things about the community.”

The award-winning restaurant, hotel, marina and conference center, located in downtown Smithfield along the Pagan River, first opened its doors on Nov. 24, 1986.

In the early 1980s, there was not a large variety of restaurants in Smithfield. The Packs decided to step in and change that — and then some.

Founder Ron Pack said he wanted to provide a “place to eat, a place to sleep and a place to buy stuff,” which is all provided at Smithfield Station.

Over the years, several local organizations and clubs have hosted meetings and special gatherings there.

In 2007, the business doubled in size and added more hotel rooms, a conference center, retail shops and marina slips. Additionally, in 1994, the restaurant added a lighthouse on-site, which has been featured in several local, regional and national publications.

Ron and Tina Pack, who are currently “semi-retired,” officially handed ownership over to their sons, Randy and Brian, in the early 2000s. However, both have helped around the restaurant for most of their lives.

“We’ve done everything in between,” Randy Pack said.

Among the 65 employees on staff, there are several who have worked at the restaurant for more than 20 years.

“The restaurant is truly only as good as its own people, and fortunately we have good people,” Randy Pack said.

The owners attribute the success of the business to its cuisine, hospitality and location.

“We’re successful due to our proximity to all of Hampton Roads,” Ron Pack said.

“[We serve] really quality food and a really nice presentation,” Randy Pack said. “We take good care of our people.”