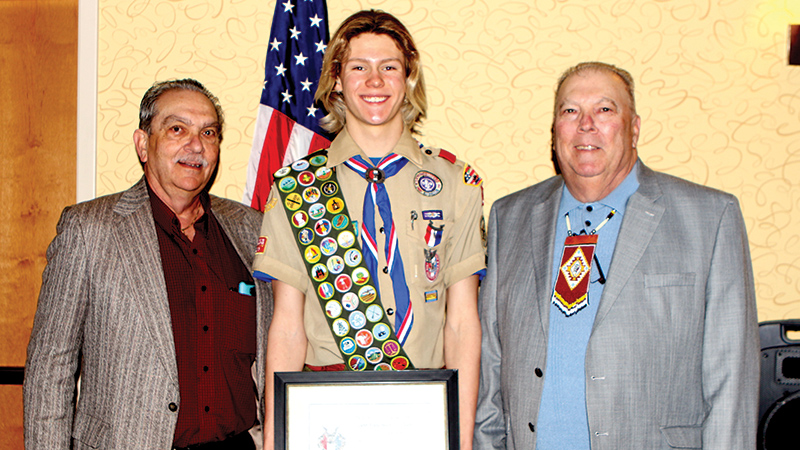 Nansemond Indian Tribe Assistant Chief Sam Bass and Chief Emeritus Earl Bass presented Troop 16 Eagle Scout Hunter Ward with an award at the Council Recognition banquet on March 18. “I was really honored to do that for Hunter,” Earl Bass said. “It was a well deserved award.”

“It is very fulfilling to receive this award,” Ward said. “I really did put a lot of time and effort into this project, as did all that helped me.”

Ward built two authentic longhouses and a lean-to shelter with the help of more than 40 fellow scouts.

They stripped bark from more than 200 saplings using draw knives and shaped them for framework. Intersecting joints were lashed together with twine for added strength. The final structures were covered with woven reed mats.

“The biggest challenge as far as work was probably the bark skinning,” he said. “This process was the most physically demanding, and often very time consuming.”

Other Eagle Scout projects are ongoing at the village, such as trail improvements and a ceremonial fire pit with benches made of cedar logs, according to Earl Bass. Other troops in the area are planning similar projects.

“Hunter has started a movement out there on our property,” Bass said. “Other scouts have been inspired by what he did.”

Ward said he didn’t have to say much to convince his fellow scouts to support the village.

“I believe the fact that my project was so new and different it spoke for itself, and inspired others to do similar projects,” he said.

Troop 16 committee chairman John MacDonald said he has watched Ward grow into a leader since he was a Cub Scout.

“He is a leader,” he said. “The boys look up to him and respect him. There are adventures in scouting that require that extra push and drive internally, and he’s got it.”

The project aids the Nansemond tribe’s goal of creating an authentic village on its ancestral lands. Bass said the tribe wants to use the village to educate the public on the Nansemond heritage.

“We just want to honor our ancestors and keep our heritage for future generations.”

Ward said the village will have a positive impact on the community.

“I believe when the village is complete and opened to the public, it will be a positive asset in the community,” he said.