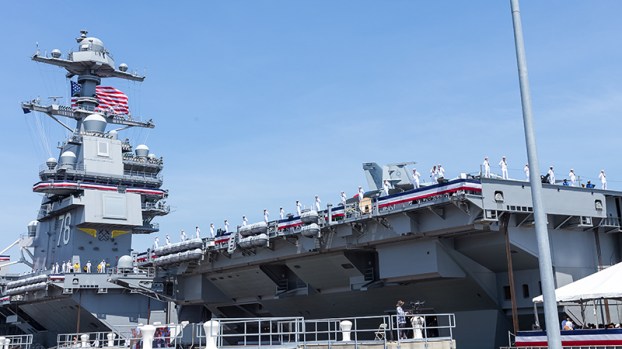 Sailors man the rails and bring the ship to life during the commissioning ceremony for the USS Gerald R. Ford at Naval Station Norfolk on Saturday. R.E. Spears/Suffolk News-Herald

“That love of country went into every rivet and bulkhead on this vessel,” President Donald Trump said aboard the ship during the ceremony at Naval Station Norfolk. “American might is second to none, and we’re getting bigger and better and stronger every day of my administration.”

The ceremony featured not only the visit from Trump but also many other dignitaries, including Gov. Terry McAuliffe, Defense Secretary James Mattis, former Defense Secretary Donald Rumsfeld, former Vice President Dick Cheney and others.

Susan Ford Bales, the ship’s sponsor and daughter of the 38th president, also was in attendance to give the command to man the ship and bring it to life — at which hundreds of sailors in dress whites ran from the pier, up the gangway, through the hangar bay where the ceremony was held, up several ladders and onto the flight deck, where they manned the rails. 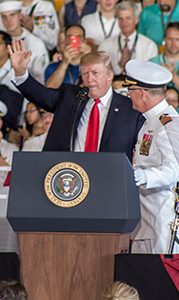 President Donald Trump waves to the crowd near the end of the ceremony.

“This is a source of indescribable pride and humility,” Bales said during the ceremony, quoting her late father’s reaction to learning of the ship’s name.

Ford was born July 14, 1913, and was raised in Michigan. He attended the University of Michigan and excelled in athletics. He responded to the 1941 Pearl Harbor attack by enlisting in the Navy and served aboard the USS Monterey in the Pacific Theater, participating in many carrier strikes.

According to numerous speakers at Saturday’s event, the new ship embodies the characteristics of the 38th president.

“She represents the strength, courage and integrity of the 38th president of the United States,” said Matthew Mulherin, president of Newport News Shipbuilding, which constructed the carrier.

“Wherever this vessel cuts through the horizon, our allies will rest easy and our enemies will shake with fear,” Trump said during his remarks. “Our true strength is our people. A ship is only as good as the people that serve on it.”

Channeling President Theodore Roosevelt, Secretary of the Navy Sean Stackley said, “Mr. President, one of your predecessors famously said, ‘Speak softly and carry a big stick.’ We offer you, sir, a big stick.”

Trump used the occasion to call upon Congress to pass a budget to ensure continued funding for the military.

“We need Congress to do its job and pass the budget,” Trump said. He urged folks to call their representatives. “You can also call those senators to make sure you get health care,” he added.

He also asked Congress to reform the defense acquisition process.

McAuliffe also said in an interview after the ceremony that Congress needs to pass a budget.

“They need to do a budget in Washington,” he said. “Even with printing money, they still can’t get a budget.”

McAuliffe also said he had pressed the defense officials, including the president, to invest more in Virginia’s military community.

“Because of our success here, you need to put more assets here,” he said.

Following the ceremony, guests were able to go on tours throughout the ship, visiting locations such as the flight deck, pilothouse, gymnasium, chapel and mess decks.

Strothers steps down at NSA

By Matthew Hatfield Special to the News-Herald Lamont Strothers will not be returning as the head boys’ basketball coach at... read more