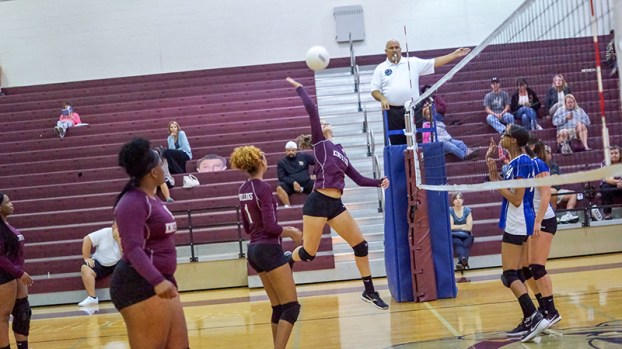 Jordan Fransee goes for a kill shot. Fransee returns as an experienced upperclassman for the Lady Bulldogs. (Caroline LaMagna photo)

The Lady Bulldogs are hopeful that with a young team this year, they will have more success as they gain more experience.

The King’s Fork High School girls’ volleyball team returns a young team, with a lot of its production from last year having graduated. The Lady Bulldogs will have a new starting lineup this season that coach Ann Bailey hopes can gel.

“We are pretty young,” Bailey said. “We have a lot of first-time players who are getting the hang of the game. We are starting to re-learn some things while also figuring out a successful lineup for us this season.”

Jordan Fransee returns for the Lady Bulldogs this year, and her experience and athletic ability will be of great help to King’s Fork. Preseason involved a lot of teaching to get first-year players up to speed.

One thing that has drastically improved from last season is the team’s attitude. Last year, Bailey mentioned that she wanted her girls to have more positive attitudes. Sometimes sports can be a frustrating thing, and Bailey took upon herself to make it a point of emphasis this season. A positive attitude leads to more positive results in the win-loss column.

“Having the right attitude is everything,” Bailey said. “I look for those things. I want to see my players always being positive. I want to see constructive criticism for others that are on the court. It’s the little things that make you a great teammate. We want to be a good representation of King’s Fork at all times.”

Bailey continues to push her players to find their roles while also playing consistently at a high level. Especially with the younger and inexperienced players, Bailey wants to instill as much confidence in them as possible. The higher the player’s confidence is, the more prepared they are when their number is called.

“Some of the players are coming around,” Bailey said. “They are getting the skill and technique down. Overall, they have learned a lot so far. We are going to continue to learn each other and get better.”