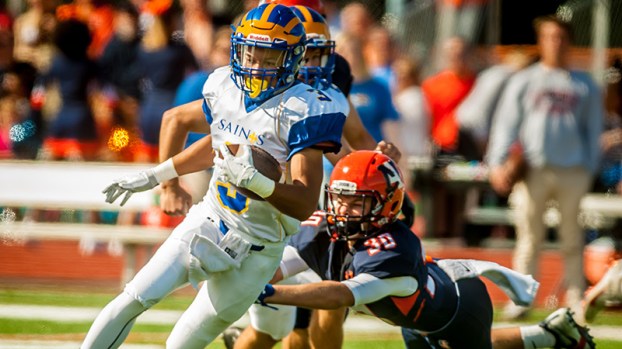 Erek Smith makes a play for the Saints during a game last year. NSA will start its season off against Norfolk Christian at 2 p.m. Saturday. (Sam Mizelle photo)

Two Suffolk schools kick off their football season this week on the road.

The Bulldogs will travel to Portsmouth on Friday to take on the Presidents. It is the first official game of the season, and emotions are running high. Camps have been long, and players are ready to make it count in the win-loss column.

“I think we’ve had a really good camp. Everybody is still learning and growing,” Bulldogs coach Scottie Littles said. “We just want to get better each week. We’re not worried about what happened two weeks ago, or what will happen later on in the season. We wanted to make sure we were well prepared this week for Wilson.”

The Bulldogs will be looking to get off to a fast start with a spread offense. Last offseason, quarterback Justin German won the camp battle for the starting quarterback position. He got off to a strong year before injuring his leg, ending his season with four games left and the playoffs. He hopes to return stronger than ever this year.

German was able to make plays to his top receiving option, Cherrod Joe, who set a school record with 825 yards receiving. He also got explosive play out of the dynamic King’s Fork running back Darran Butts. With another year under Littles’ system, Joe, German and Butts should improve as a dynamic offensive core.

On defense, the Bulldogs are loaded with talent. They will have Chris Shearin roaming at the safety position while Butts also plays the cornerback position. Moving from the secondary up to linebacker will be senior T.J. Hart. He had 11 interceptions last year to lead Hampton Roads, and Littles is hoping he can make even more plays at the linebacker position. Treyshawn Mitchell will be a terror for offensive linemen to deal with, which will bode well for the secondary. The more pressure Mitchell creates, the more opportunities the secondary can have at turnovers. The Bulldogs will also look to get contributions from Lakeland High School all-region transfer Jayree Hardy. Devin Chambliss will continue to be a solid sideline to sideline linebacker.

A name to watch on the Bulldogs defense this weekend will be senior Sam Dunn. He has been moved to the defensive end position and totaled four sacks in the two scrimmages the Bulldogs had.

“I want us to go out there and play fast and hungry,” Littles said. “We have big goals, and it’s going to take us giving everything we got one game at a time. We have talent; we have depth; but we have to be a mature football team. A mature football team does the right things at all time to be successful.”

The Bulldogs will be at Wilson High School at 7 p.m. Friday.

The Saints are ready to get things going in their second year under coach Mike Biehl. They will be taking on the Ambassadors, who will be playing in a brand new stadium. Last season, the Saints opened up against Norfolk Christian at home and took a 30-6 loss.

This time around, the Saints are hoping to change the script. Biehl has told his players the energy will be high because of the new stadium. He is hoping the Saints can ruin the party.

“We want to go out and attack first throughout the whole 48 minutes,” he said. “I’m feeling more comfortable with the guys regarding their personalities, and I’m excited about what they can do. I told the kids it’s going to be a party. We have to figure out whether we are going to crash it or be a part of it.”

Biehl wants to see great execution from his team. The Saints have another year in the system and understand what is required. At the quarterback position, they return Robby Tew. He threw 17 touchdowns last season. On the outside, he will look to make plays to Erek Smith and Ehron Knight. Both players found themselves receiving recognition on the all-state and all-conference teams last year.

Ben Koppelman and Zac Morris will contribute on offense and defense as well. The Saints will have multiple playmakers playing both ways, with hopes to put NSA in the best positions to be successful at all cost.

NSA will be successful if they can maintain and build off of good drives. If the Saints are able to keep applying pressure offensively and defensively, they can look to have a strong year.

“We have a strong mix of young and veteran players,” Biehl said. “We can be a real special group. The nucleus we have will be able to fuel us through the rest of the season.”

NSA will be at Norfolk Christian Saturday at 2 p.m.

The Lady Bulldogs are hopeful that with a young team this year, they will have more success as they gain... read more