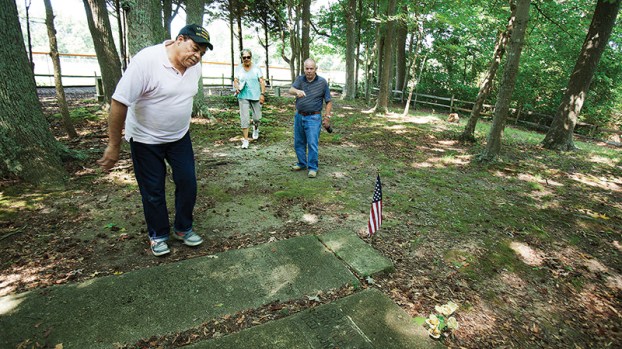 Just off Portsmouth Boulevard, tucked next to the parking lot of a strip mall, the Lassiter family rests in peace — or as much peace as their busy location allows.

The Lassiters — James (March 3, 1831 – Aug. 28, 1905) and Harriett (April 23, 1838 – Dec. 18, 1888) — were farmers in what was Norfolk County and is now Western Branch. It’s a safe guess that when the Lassiters, along with at least three of their children, were buried there, no one imagined the family plot would one day be within throwing distance of an egg roll from a Chinese restaurant. 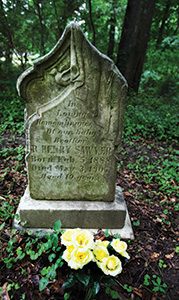 A gravestone from the early 20th century marks a burial plot in the Sawyer family cemetery at Drum Point. Officials with the Norfolk County Historical Society are trying to locate all of the little cemeteries scattered around the Western Branch area. (John H. Sheally II)

Three local volunteers, Camilla Wise, John York and Helen Rogers, seek out similar gravesites to record the tombstone inscriptions and discover more about the interred and their lives in Western Branch.

Their efforts are part of a project by the Norfolk County Historical Society to update a book, “Tombstone Inscriptions of Norfolk County, Virginia,” published by the society in 1979.
Even at 200 pages, that book, originally researched with the help of the Great Bridge Chapter of the Daughters of the American Revolution, failed to list any African-American graves or many of the family farmyard gravesites in Western Branch.

Robert B. Hitchings, the historical society’s current president, wants to correct that omission.

While its name might be confusing, the society devotes itself to preserving the history of Chesapeake and surrounding areas. Hitchings also serves as the archivist and historian for the Wallace Memorial Room, the library of the Norfolk County Historical Society, housed in the Chesapeake library on Cedar Road.

A Norfolk native, he was, for many years, the archivist and historian for the Sargeant Memorial History Room in Norfolk’s Kirn Library.

The soul and character of Western Branch are what he wants to add to the story of Chesapeake. The gravestone project is part of that effort. 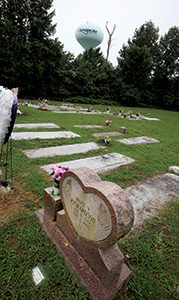 The New Hope Baptist Church cemetery is still in use, even though the church it once surrounded burned in 1960. (John H. Sheally II)

Recently Hitchings met with Hinton Hurff Sr., president of Greenlawn Memorial Gardens and Mausoleum on Airline Boulevard, to learn more about the grave of Capt. John Lanier, who died in 1846.

Lanier was originally buried on a farm near Greenlawn. Sometime between 1952 and 1982, when the farmer sold his land for home sites, Lanier was reinterred at Greenlawn. He rests, amid unanswered questions, only a few steps from Hurff’s office.

What happened to the unmarked grave of the female who was buried next to him on the farm? Was she one of his two wives? Or another relative? What was his connection to the land where he was originally buried?

The stories of the people buried in the Watts family cemetery are better known. The shaded graveyard sits behind the ball fields at Western Branch Park, just a long, high fly from home plate. Grover Watts, a retired Churchland Middle School teacher and Vietnam veteran, visits the cemetery often, enjoying the stories that come to mind as he walks among the graves.

“My grandfather had eight brothers and six sisters — a huge family. The Watts family home was in Portsmouth on the corner of North and Dinwiddie Streets, but they had a farm on what is now Western Branch Park. Back in the 1850s and 1860s, half of the Watts — freed and slaves — were transported to Louisiana as slaves.”

Watts points out the grave of Vertley V. Watts (April 5, 1866 – Feb. 23, 1950), his great-grandmother and the matriarch of his side of the family. Her husband, Augustus Watts (1855 – 1925), was driving his horse and buggy to the farm from downtown Portsmouth when a car crashed into the buggy, killing him. Augustus’s brother, Alexander, realizing that Augustus was overdue, went looking for him and found his body on the road. Today they all rest in the Watts family cemetery. 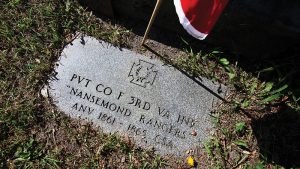 Above, a Confederate soldier is buried in a small cemetery tucked between Portsmouth Boulevard and a strip mall west of I-664. (John H. Sheally II)

Not too far away, on Pughsville Road within sight of I-664, the departed members of New Hope Baptist Church rest in a cemetery that once surrounded the church. The brick-covered baptismal pool is the only remaining fragment of the structure.

Mary Anderson, whose great-great-grandmother named the church New Hope, has several relatives buried there, including her husband, Lee Anderson. She remembers driving him back to his Army base after leave in 1960 and seeing an unfamiliar car parked behind the church with several strangers milling about.

Sensing trouble, they returned to Pughsville to find help. When they drove back, the church was already engulfed in flames and burning to the ground.

The congregation rallied and built a new church in Pughsville two years later. Church members still use the cemetery, however.

Hitchings hears the stories, and they reaffirm his concern to know where graves are located before continuing development erases part of local history. He is gratified to have volunteers like Wise, York, Rogers and historical society secretary Jean Spencer seeking out and documenting gravesites in backyards and wooded areas.

“You do it because you are driven to do it, because you want to know who those people were,” Spencer said.

Have information on a family gravesite? Call the Norfolk County Historical Society at 410-7152.