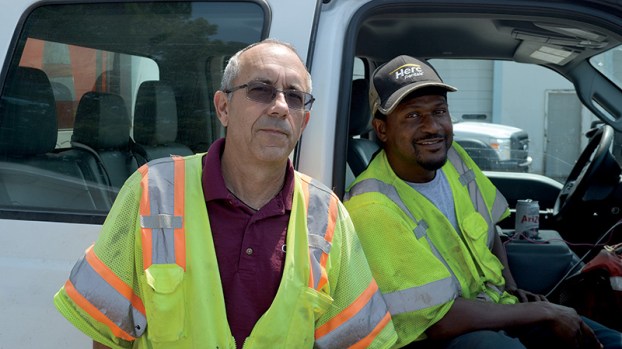 Civil engineer Mike Boron poses for a picture with welder Bryan Patterson, with Patterson sitting in one of the crew trucks parked at the Chesapeake Department of Public Works field office on South Military Highway.

Keeping the bridges up

People like Mike Boron make sure those bridges are safe.

Boron has been a civil engineer with Chesapeake Public Works for more than 14 years. He moved to the city with his wife, Laura, a master’s degree in civil engineering from Old Dominion University and years of construction experience in the U.S. Navy.

He is Engineer Three in the Bridges and Structures Division and is responsible for leading operations and maintenance for the Gilmerton, Centerville Turnpike and Great Bridge drawbridges, along with more than 90 other bridges and culverts in Chesapeake.

He said the challenges of his position change daily.

“It’s never the same,” he said. “You start out the day, and then all of a sudden something is wrong with one of the moveable bridges, and traffic stops moving. We have to go out there and figure out the problem.”

“The idea is to get traffic moving as safely and as quickly as you can,” he explained.

He oversees a team of more than 30 electricians, mechanics and other personnel at their field office in Chesapeake. Crane trucks, snow plows and bucket trucks that can lift someone 31 feet in the air are parked at the field office for their regular maintenance work and emergencies.

Boron said crews have recently finished maintenance on the Hodges Ferry Bridge, which has seen more traffic with the continued development along Portsmouth Boulevard.

“There’s definitely been an increase in the volume of traffic, and that Portsmouth corridor has definitely grown,” he said. “They built it with the forethought of increasing traffic. It’s just a matter of maintaining those structures.”

He said crews use about 1,000 pounds of concrete each month to keep bridges in safe condition, along with 800 feet of guardrail. Boron can often be found on site, personally inspecting the work to make sure it’s done properly.

“It’s easier to get it right the first time than have to come back and redo it,” he said. “You’ve got look at everything, so you’re all over it. If it’s muddy, you’re in the mud.”

A big snowfall, he said, can mean 12-hour shifts over several days devoted to keeping the streets manageable and travelers safe.

One of his more memorable challenges was when the Great Bridge Bridge was struck by lightning. Computer systems were fried, and six crew members operated the bridge lift for vessels that were bottled up and waiting to pass through.

Boron considers himself a problem solver and enjoys the challenges of his job. He encourages members of his crew to take a similar perspective in the midst of crises.

Putting the ‘service’ in community

There are always loads of articles — and sales — around the back-to-school time of year. They describe how parents... read more