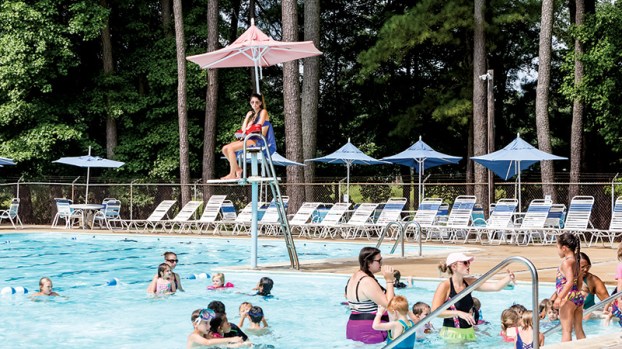 Lifeguard Samantha Farpour keeps a careful watch over a group of daycare students and other pool users during a recent bright summer day at the Marlin Club.

Splash time at the pool

The neighborhood pool: For many, the thought of summer days there brings memories that engage all the senses.

The smell of chlorine and sunscreen. The sound of children’s shouts and splashing water and a clattering diving board bouncing back after a young teen has performed an artful cannonball. The sight of colorful bathing suits and puffy white clouds building into afternoon thunderstorms that send everyone for cover. The taste of hot soda from a can and salty chips eaten with wet hands. The heat of a white concrete pool deck on bare feet after it has baked all day under the summer sun.

Yes, the neighborhood pool is a place where memories are made.

But to the folks in Western Branch who are members of the Marlin Club, the neighborhood pool is also a home away from home, a second family, and an investment in the future.

“It’s a nice little quiet spot here in the woods,” said Ali Dowson, the pool’s general manager. “It’s a good place to hang out and relieve some stress.”

The Marlin Club has been around since 1968, the year after a group held a meeting to gather interest. About 125 families — enough to attract banks willing to finance construction — said they would be interested.

“This whole idea started out as a concept by the neighbors that lived in the community,” said David Liles, a founding member and former board member. Don Chantry was one of the main ones spurring his neighbors on.

“There was not much in Western Branch at the time,” Liles said. “There was nothing else out here to do, particularly in the summer months — certainly no outdoor swimming facilities.”

The club started with a pool, a wading pool and a one-story bath house. A lean-to to sell drinks and snacks was added, and the bath house later received a second floor, which now includes the manager’s office and an adult lounge. Later, a full concession building with equipment for hot food service was added.

The concession building once held dances and holiday parties during the off-season; these days, the wildest it gets in there is when kids take a break from the pool to play foosball. Tennis courts were added in 1976.

These days, about 220 families are stockholders, treasurer Robin Elms said.

“This is a huge staple here,” she said. The club started a swim team in the 1980s, which still has a huge following and competes locally against rival Churchland and others.

Measuring from 3 to 12 feet deep, the pool features one-meter and three-meter springboards and a slide. With a 265,000-gallon capacity, it takes a week to fill in the spring. There’s also still a wading pool for the little ones.

The Marlin Club has now served multiple generations of members, and many of those who grew up coming to the pool, such as Dowson, now work there. She went from a member, to a swim team member, to a doorkeeper, to working the concession stand, to being a lifeguard and swim coach, and to assistant manager and finally manager.

She’s soon to depart the position, though, having recently graduated college and preparing to head for a new job at Johns Hopkins Hospital in Baltimore.

“It’s neat to me that we’re training up kids,” Elms said.

Liles called the club “the social hub of Western Branch for kids of all ages.” And it bears out that reputation.

“There are so many members that have put pools in their backyard, and they find the kids still want to come up here, because this is where their friends are,” Elms said.

But it’s far more important than just a hangout spot. Liles points out one simple reason why.

“Heaven knows how many people’s lives have been saved by teaching kids how to swim,” he said. “You never know when that effort and the benefit of it will show.”

Liles said many volunteers through the years have helped keep the club afloat.

“There’s a number of people that step up to volunteer time and talent the club doesn’t have to pay for,” he said. “It takes an army of people. You do have to have a passion and a commitment.”

Those volunteers include the board of directors, which currently is manned by Elms, Evan Pierce, Ted Miller, Frank “Chip” Beale, Scott Butcher, Cathy Tarr, Debbie Rogers and Jason Hunsberger.
Dowson added that the club’s impact on Western Branch can never be fully measured.

“It’s an investment in the future,” she said.

Story by Phyllis Speidell Just off Portsmouth Boulevard, tucked next to the parking lot of a strip mall, the Lassiter... read more