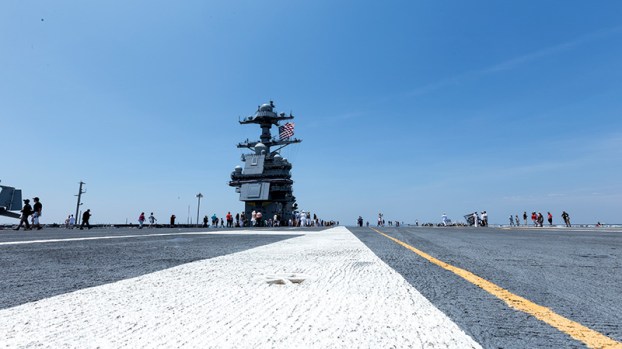 The carrier’s island rises into the afternoon sky from the flight deck.

‘Our enemies will shake with fear’

Bearing two nuclear reactors, spanning 1,092 feet long and 256 feet wide on the flight deck, displacing more than 100,000 tons of water, speeding at more than 30 knots, carrying more than 75 aircraft and manned by a crew of more than 4,500 men and women, the USS Gerald R. Ford is an engineering marvel.

Wrought by the hands of tens of thousands of sailors and civilians who designed and built it and already manned by thousands of sailors, the U.S. Navy’s new $12.9-billion aircraft carrier was commissioned on July 22 in a ceremony just down the road from Western Branch.

Navy officials said 10,000 people were expected at the commissioning, a tradition-filled event at which the Ford was officially placed into the Navy’s service. And following that ceremony, the Navy wasted little time in taking the ship’s wheel, sending the Ford out just a week later for an early set of trials that saw sailors launch and recover the carrier’s first aircraft and begin to test the ship’s advanced technology. 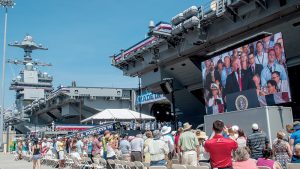 The crowd watches on a screen from the pier as President Donald Trump speaks at the commissioning ceremony for USS Gerald R. Ford at Naval Station Norfolk.

Susan Ford Bales, the ship’s sponsor and daughter of the 38th president, also was in attendance to give the command to man the ship and bring it to life — at which hundreds of sailors in dress whites ran from the pier, up the gangway, through the hangar bay where the ceremony was held, up several ladders and onto the flight deck, where they manned the rails.

“This is a source of indescribable pride and humility,” Bales said during the ceremony, quoting her late father’s reaction to learning of the ship’s name.

Ford was born July 14, 1913, and was raised in Michigan. He attended the University of Michigan and excelled in athletics. He responded to the 1941 Pearl Harbor attack by enlisting in the Navy and served aboard the USS Monterey in the Pacific Theater, participating in many carrier strikes.
Ford later was elected to the House of Representatives and served on the Warren Commission that investigated the assassination of President John F. Kennedy. He later was appointed vice president following the resignation of Spiro Agnew and then became president following the resignation of Richard Nixon, making him the only president never to have been elected president or vice president.

According to numerous speakers at the commissioning, the new ship embodies the characteristics of the 38th president.

“She represents the strength, courage and integrity of the 38th president of the United States,” said Matthew Mulherin, president of Newport News Shipbuilding.

“Wherever this vessel cuts through the horizon, our allies will rest easy and our enemies will shake with fear,” Trump said during his remarks. “Our true strength is our people. A ship is only as good as the people that serve on it.” 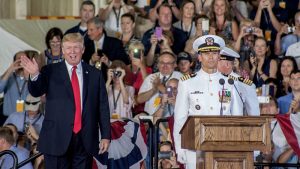 Capt. Brent Gaut, executive officer of the USS Ford, surveys the crowd after introducing President Donald Trump at the Ford’s commissioning in July.

This particular ship, however, is expected to be the strongest and most advanced carrier ever built.

Leading the list of improvements on the Ford is a power plant capable of providing three times the power of a Nimitz-class carrier. That increased power allows for all manner of improvements in design and operation.

The Ford is expected to be able to power the Navy’s first laser weapons system when they come online soon. Its electromagnetic launch system, enlarged flight deck and advanced aircraft elevators will allow it to cycle airplanes on and off the ship more quickly than ever. Its hull has been strengthened to improve its survivability, and its improved weapons and propulsion systems will make this carrier a more deadly adversary than ever for those who challenge it. 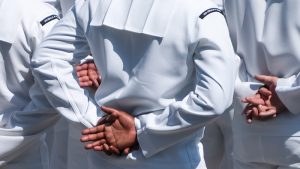 Sailors stand at parade rest as they await the command to man the rails during the commissioning ceremony for the USS Gerald R. Ford.

Acknowledging the military power projected by this new vessel, Secretary of the Navy Sean Stackley took the opportunity presented by July’s commissioning ceremony to channel President Theodore Roosevelt as he made remarks prior to President Trump’s: “Mr. President, one of your predecessors famously said, ‘Speak softly and carry a big stick.’ We offer you, sir, a big stick.”

Splash time at the pool

The neighborhood pool: For many, the thought of summer days there brings memories that engage all the senses. The smell... read more