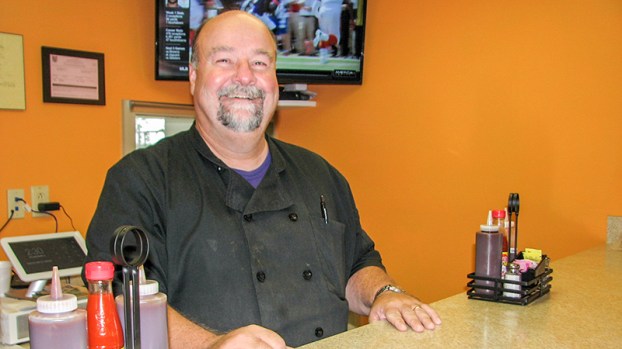 Wayne Powers shows off the new location of Suffolk BBQ Co. at Suffolk Executive Airport, where the established restaurant will serve up breakfast and lunch in an additional location.

A local restaurant that has established itself on North Main Street has ventured out to a new, high-flying location.

Suffolk BBQ Co., which has been open at 1208 N. Main St. since 2013, has opened a second location at the Suffolk Executive Airport, located at 1200 Gene Bolton Drive. The restaurant held a grand opening Sept. 6.

“We’re off to a good start,” said Wayne Powers, who owns and operates both locations with his wife, Melinda. “It’s been better than I thought it would be.”

Powers said he has been hoping to either expand his primary location or open a second one for a couple of years.

“I felt it was a good step for us,” he said of the airport location. “It’s close. It’s small. It’s manageable.”

The small restaurant space in the airport’s terminal has changed several times in recent years as various other operators opened and closed. But Powers is looking forward to doing brisk business and even expanding his services at the new location.

Powers said the restaurant will offer delivery to an area of the city that currently can’t get food delivered.

So far, customers have included not only pilots, business people and Skydive Suffolk customers who are using the airport but also local folks who don’t have another reason to come to the airport.

Powers said he moved key employees to the new location to help open it.

“I want to give a shout-out to all my staff,” he said. “They have worked very hard, and I couldn’t do it without them.”

The menu at the restaurant will include barbecue sandwiches and platters, ribs and chicken tender baskets, according to a city press release. Hotcakes, French toast, omelets and egg sandwiches are some of the breakfast options.

By Elaine Lankford Can you imagine being gifted in a way that you are keenly aware of what is happening... read more