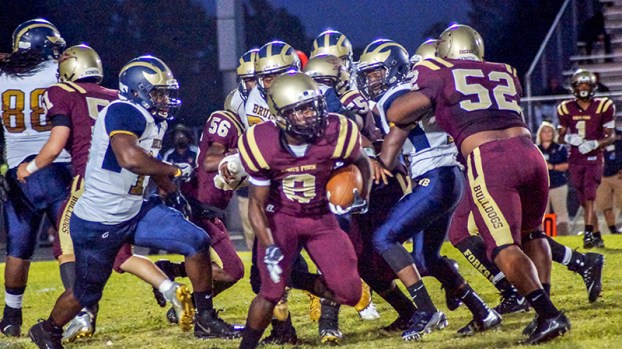 All four Suffolk schools are back in action for week four, which includes homecoming weekend for King’s Fork High School.

“There is a lot of distraction during the week of homecoming,” coach Scottie Littles said. “But our kids have been doing a good job staying focused. We have to be disciplined and mature enough to play a four-quarter game. Anybody can do it for a quarter or two, but can you have that consistency for four quarters.”

Last year against Grassfield, King’s Fork took a 41-17 loss. With the Grizzlies entering the game with an 0-4 record, King’s Fork is hoping not to hand them their first win of the season. Grassfield has a good offensive line and runs a spread offense. In recent weeks, the Bulldogs had been playing against Wing-T offenses, so it will be a different challenge facing this style of offense.

Offensively, the Bulldogs want to continue to get the ball in the playmaker’s hands. Darran Butts went over 100 yards rushing last week for the third time. Sam Dunn continued to make plays through the air for King’s Fork. Defensively, the Bulldogs have a talented core, which on any given day could shut an opposing offense out.

“It is important for us to get a win,” Butts said. “We been having a little trouble finishing. But if we do that and cut out penalties, we will be fine.”

Teachers, students, parents and alumni all gather for homecoming weekend. For the sake of representing King’s Fork, the Bulldogs want to make sure they take care of business on the field so everyone can enjoy a good homecoming weekend.

“It is a time for alumni to come back and enjoy a special weekend,” Littles said. “Last year, we were disappointed we didn’t get the win. Those guys remember that feeling, and we want to give the King’s Fork community something to be proud of.”

This game has the potential to be the best game in South Hampton Roads this weekend. Both Indian River and Nansemond River are two of the very few teams in the area who are 3-0.

Last week, a late touchdown from Kori Riddick to Kevin Johnson in the fourth quarter sealed a win for Nansemond River over rival Lakeland High School. 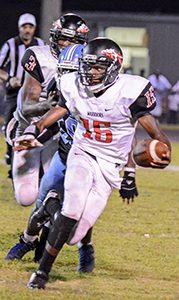 Kori Riddick gets outside of the pocket for the Warriors. The Warriors will host Indian River at 7 p.m. Friday, which will lead to the first loss of the season for one of the teams.
Melissa Glover photo

Meanwhile, Indian River has a potent rushing attack that features Ricardo Ray and Nashun Overton. Nansemond River’s rushing attack boasts the strong duo of Wali Faulk and Jaquan Brayboy. They combined for 153 rushing yards against Lakeland. Riddick can also make plays with his legs if need be. He added a rushing touchdown against Lakeland last week.

Coaches and players have had high energy this week, as the Warriors want to continue their undefeated streak.

“We’ve been preaching execution all week at practice,” Faulk said. “We have been crisp all week. We are all just happy to play football, and that’s what we have to maintain if we want to extend our win streak.”

NSA will be at home for a second straight week as they take on Portsmouth Christian. The Saints are coming off of a comeback victory against Isle of Wight Academy to earn their first win. NSA was down as much as 27-7 before coming back and winning the game. Saints coach Mike Biehl has been thinking all week about how he feels his team will respond.

Preparation this week has been good, especially on the defensive side of the ball. Biehl says his team has been having some of the best defensive practices of the season. The headliner for Portsmouth Christian is wide receiver Da’Kendall James. Saints athlete Erek Smith will be tasked with following James wherever he goes on the field.

Offensively, NSA wants to continue to build a rhythm. Portsmouth Christian is an explosive team, so Biehl knows his team will need to continue to put points up on the board.

“Each week is important,” Biehl said. “Until we get into the playoffs, we want to attack each week with a mission.”

The Cavs will have a tough task this week. They will take on an Oscar Smith team who hasn’t lost a Southeastern District game in 10 years. Last season, Lakeland held Oscar Smith to its lowest point total of the season with 17. Had Lakeland gotten anything going offensively, they could have put themselves in position to win.

It is always a tough task playing the Tigers on the road, which the Cavs did last season. Lakeland is coming off of a tough loss to Nansemond River. Tyquan Holloman has been playing well behind center for the Cavs. In three games, he remains without an interception. Lakeland lost one game at home all season last year and hopes to keep it that way with the Tigers visiting.

“We have to continue to play Lakeland football,” Holloman said. “If we do that, we can get a win.”

It will take a total team effort by the Cavs to pull out a win. Lakeland will host Oscar Smith at 7 p.m. Friday.