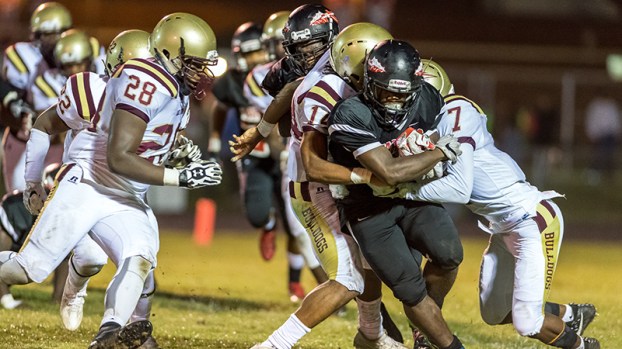 KF defense too much for Warriors

Nansemond River High School had won the previous two matchups against the Bulldogs. King’s Fork was the visitor this time but constantly made itself at home at the line of scrimmage when the Warriors rushed the ball.

Prior to the game, the Bulldogs knew they had to stop the Warriors’ rushing attack, and they succeeded, limiting NRHS to negative two yards on its first 21 carries.

Offensively, the Bulldogs exploded for 39 points in the second half.

“It was a high-emotion game, because it was two Suffolk Schools,” Bulldogs coach Scottie Littles said. “I’m just super proud of the kid’s effort. They never got down. They practiced hard all week, and they stuck together. Our defense played their hearts out.”

Both teams got on the board in the first half. King’s Fork struck first with a 13-yard touchdown pass from Justin German to Sam Dunn, who was matched one-on-one against a Nansemond River defender. At the top of the second quarter, the Warriors evened the score when JaQuelle Harrell finished a Warriors drive with a four-yard touchdown run.

The teams went into the half tied at seven.

The defense finished with five sacks and a couple of interceptions.

“It was just us playing like us out there,” German said. “We had a good week of practice, and it paid off.”

The Warriors obviously felt there were things they could have done better. Wali Faulk credited the Bulldogs’ defense, which zeroed in on stopping him and Jaquan Brayboy.

“They came out aggressive and stacked the box,” Faulk said. “They did a good job of containing us and keeping us in check.”

Littles didn’t think the score was indicative to how good the Warriors are.

“They are a good physical football team,” Littles said. “Don’t let that score fool you. They are very good.”

King’s Fork will get ready for Great Bridge High School, while Nansemond River will prepare for Oscar Smith High School.

After starting the season 0-3, the Saints evened their record at 3-3 with a win Friday over St. Anne’s Belfield... read more