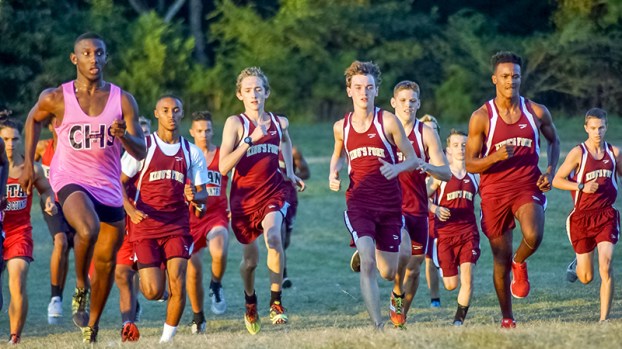 The Bulldogs cross country team gets a strong start during the fourth Southeastern District meet. They placed fourth as a team. Caroline LaMagna Photo

On the boys’ side of things, King’s Fork High School once again had an impressive meet, placing fourth out of 10 teams. Shamond Smith placed first for King’s Fork but placed No. 8 overall in the meet with a time of 17:11.43. Tyler Gray finished second for the Bulldogs and 10th overall with a time of 17:35. Marcus Ramos and Jack Van Straten finished 15th and 22nd overall, respectively, giving King’s Fork four runners in the top 25. Corinda Thomas finished No. 1 for the Lady Bulldogs, which was good for 39th overall. The Lady Bulldogs finished seventh as a team.

Diamonte Moore finished as the top runner for Lakeland High School with a time of 18:49, which put him at 39th overall for the meet. Nick Horton finished second for the Cavs. Lakeland finished ninth overall. Rachel Brinkley finished 59th for a Lady Cavs team that finished in last place.

The next district meet will be held Tuesday at Bells Mill Park.