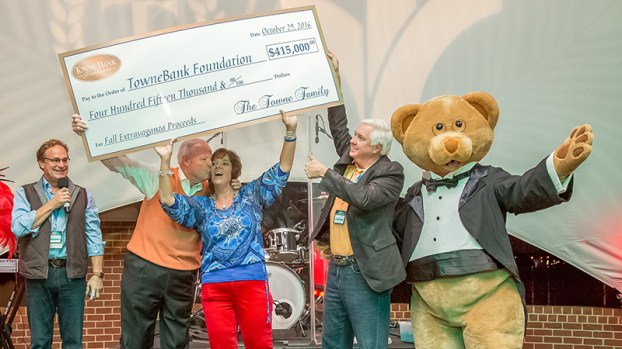 TowneBank Chief Executive Officer Bob Aston and the late Beth Prever celebrate a successful 2016 Fall Extravaganza. The event was one of the things Prever helped coordinate to raise money for the banks charitable causes. She is being honored posthumously for that work by the American Bankers Association Foundation.

Elizabeth “Beth” Prever, a Virginia banker who died earlier this year after a fight with amyotrophic lateral sclerosis, or ALS, has been named the ABA Foundation’s 2017 George Bailey Distinguished Service Award winner.

Prever worked at TowneBank in Suffolk as senior vice president of marketing and community relations, spending 11 years building a volunteer program at the bank. She helped raise hundreds of thousands of dollars in the fight against ALS before she was diagnosed with the rare disease.

Prever will be honored posthumously at ABA’s Annual Convention in Chicago on Tuesday.

Each year, the George Bailey Distinguished Service Award is given to a bank employee other than the chief executive officer who demonstrates outstanding initiative, commitment to customers and community, and inspires others.

Thanks to Prever’s initiative, TowneBank undertook a number of community-service projects, ranging from providing the local homeless with warm gloves and hats during frigid winters to working with the Roc Solid Foundation to build playsets for children with cancer.

She also coordinated TowneBank’s participation with the Salvation Army Depot, which annually provides holiday gifts, children’s clothing and stockings to those in need. Nearly 80 Towne volunteers help each year, assisting with greeting and shopping activities, as well as assembling and delivering bikes for distribution.

The diversity of volunteer activities, as well as the level of staff participation, increased exponentially under her leadership.

“Serving others and enriching the lives of those in our community represents the foundation of all that we do at TowneBank,” said Bob Aston, TowneBank chairman and chief executive officer. “No one embodied those values more than Beth. She played an enormous role in all that we were able to accomplish and her work has been, and will continue to be, an inspiration to us.”

Her most passionate project was fundraising for ALS, also known as Lou Gehrig’s disease, through the Virginia Beach ALS Walk.

TowneBank and Prever were approached nine years ago by a local businessman whose son was suffering from ALS. He asked if the bank could provide volunteer support for the walk. Prever got to work and over the years, her efforts raised approximately $400,000 for the cause and helped transform it into the largest ALS walk in the country, with significant participation from TowneBank employees.

In 2016, Prever received her own ALS diagnosis, and she succumbed to the illness in August 2017.

“We were saddened to hear of Beth’s passing,” said Rob Nichols, ABA president and chief executive officer. “She represented the very best of our industry. Her relentless effort to improve the lives of those around her will not be forgotten. This award is one way to ensure we remember her remarkable spirit.”

To honor Prever and the cause she cared about most, ABA has made a donation to the ALS Association in her name.

The ABA Foundation honors six banks annually for their commitment to their communities. This is the only award given to an individual.

What types of employees do you attract?

By Elaine Lankford Have you ever thought about what first attracted you to your spouse, your best friend or anyone... read more