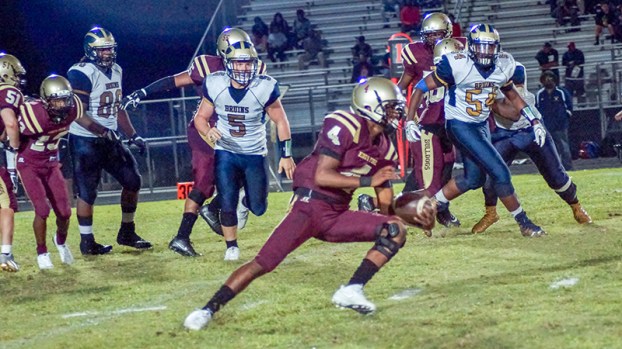 Justin German cuts up field for the Bulldogs. The Bulldogs will take on Lakeland High School at home at 7 p.m. Friday. Caroline LaMagna Photo

For game eight, two Suffolk rivals will square off with each other in an intense contest.

Lakeland will travel a little less than 10 miles up the road to King’s Fork for what has all the makings of a rival game. Last year, the two teams battled it out in a rainy shootout game, in which the Bulldogs held on for a 46-31 win. Senior running back Darran Butts rushed for 235 yards that game.

Both teams are coming off wins heading into this matchup. Lakeland grabbed a 17-7 homecoming win over Grassfield High School last weekend, while King’s Fork took a 28-7 win over Indian River.

The Bulldogs feel they are ready for the challenge.

“We have had a good week of practice, and I feel like our kids are excited about the opportunity,” Bulldogs coach Scottie Littles said. “Every game they have played has been pretty close. They have some good players over there, so we want to make sure we are executing and staying focused on what we have to do.” 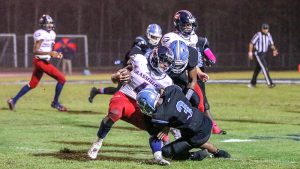 Two Cavs defenders make a stop on the ball. The Cavs will head to King’s Fork High School to take on the Bulldogs at 7 p.m. Friday.
KaSandra Baker Photo

Both teams boast explosive offenses. King’s Fork has the top rusher in South Hampton Roads with Butts, who currently has 1,100 rushing yards and 18 touchdowns. Justin German can make plays with his arm if need be. Cherrod Joe continues to be a consistent target in the passing game, along with others such as Sam Dunn.

Tyquan Holloman is an efficient passer and can get things done with his legs. He accounted for two rushing touchdowns last week in Lakeland’s win. Deondre Little, Nate Edgehill and Damonta Hawkins provide productive targets for Holloman to look for in the passing game. They will have to be at their best against a Bulldogs defense that has only allowed 20 points in its last three games.

Both teams have made it a priority to remain focused in all phases of the game.

“If we play disciplined football and play our game, we should have a good game and take the city,” Butts said.

Lakeland will be at King’s Fork at 7 p.m. Friday.

The Warriors will go on the road to face a quality opponent in Deep Creek. The Hornets have had a pretty strong season this year, but the Warriors will try to hand the team their third loss of the season.

Nansemond River is coming off of an impressive 35-0 win over Western Branch and hopes to carry that same momentum over to Deep Creek. Warriors coach David Coccoli knows how tough of an opponent Deep Creek can be and hopes his team is up for the challenge.

“They have a really good running game,” Coccoli said. “They are probably one of the better backs we will face all year. Defensively they are pretty good as well.”

This week, the Warriors have been putting an interest in stopping the run. If the Warriors special teams continue to perform the way they did last week, scoring two punt-return touchdowns, they will be in good shape against Deep Creek.

Nansemond River will be at Deep Creek at 7 p.m. Friday.

NSA will look to even up its record as they go on the road and face GCA. Last weekend, NSA took a loss to Norfolk Academy on homecoming. NSA coach Mike Biehl didn’t feel his team executed the way he knew it could. After the game, they looked at the tape and corrected things. This week, Biehl expects a high level of execution from his team this week.

“The guys are looking forward to getting back on the field,” he said. “It is going to be really obvious that we want to put our best foot forward at kickoff, and that what I am excited for.”

With only a couple of games left on the schedule, Biehl has been making it known that his team has to finish out strong. At the moment, NSA is on the outside looking in when it comes to a playoff spot. The Saints have to stay the course and win out to put themselves in the best possible position for the postseason.

“We have to make each moment count. I think the kids understand that as well,” Biehl said. “I just want to see us be relentless on all sides of the ball. We just want to show that we are a better team than what we showed last weekend.”