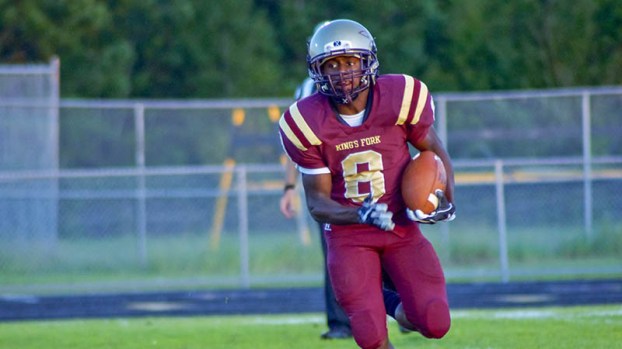 The senior running back has taken each field he has stepped on by storm this year. He is the current rushing leader in the Southeastern District and has more than 15 touchdowns scored for the season. He is an integral part of King’s Fork’s 7-1 record. After a successful junior year where Butts finished with more than 1,300 rushing yards and more than 15 touchdowns, his world changed soon thereafter.

In February, Butts’ mother passed away. As with any unfortunate situation like that, it was hard for the senior Bulldog to deal with. But instead of expressing his stress and frustration negatively, he decided to put it into football.

“It made me grind harder,” he said. “I know she is looking down on me, so it is only right I make her proud. My family, teammates and coaches helped me through everything.”

Before she died, Butts told his mother he was going to work as hard as he could every day. He set some statistical goals, but one goal he promised his mother was to win a state championship with his teammates. Statistically, he feels he is in a good place but knows there is still more work to be done.

“I feel like I’m doing good, but I have a lot more to accomplish,” he said. “We still haven’t won states yet, so I can’t say I fully went through on my promise yet. When that happens, that is when I will feel I have accomplished everything I have promised her.”

He is inspired by his mother, grandmother and his friend, Russell. He wears all those names on his cleats, so each of them feels like they are right beside him. His father and stepmother inspire him as well. There is a method to the way Butts plays. Before each play, he scans the field. In his mind, he knows what hole he wants to hit, and in his mind, he feels it is a touchdown every time.

“None of this happens without my offensive linemen,” Butts said. “They make things happen for me up front.”

The Bulldog also gives credit to his coach, Scottie Littles, who has been pushing not only on the field but in the classroom as well. He also pushes Butts to be a better person within his community as well.

The senior is getting his fair share of attention from colleges. He currently has multiple offers from NCAA Division II schools, with interest from NCAA Division I schools as well. Butts and the Bulldogs will be in action against Deep Creek High School this week.