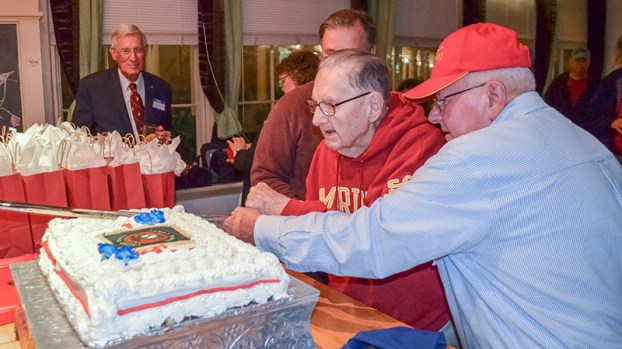 Dozens of active and retired U.S. Marines gathered in Suffolk for an annual event of camaraderie and tradition on the 242nd birthday of the U.S. Marine Corps, marking the 42nd gathering since it began in 1975.

It started when Marine veteran Jack Eure received a phone call from his friend and fellow Marine veteran Bill Harrell on Nov. 10, 1975, when the Marine Corps had reached the 200-year mark. The two had known each other since their time at Suffolk High School.

They met for lunch that day at George’s Steakhouse in Suffolk and decided to make it an annual tradition with as many Marines as they could find, Eure said. They moved it to the Holiday Inn and then Kelly’s Tavern on West Constance Road as their numbers grew each year.

“We kept asking people for names and addresses, and just kept adding them to the list,” Eure said.

That list currently has more than 150 names and addresses, he said.

The Marines met on Friday at Mosaic Restaurant for the first time, since Kelly’s closed. Eure simply called the manager, and they were given the whole restaurant for their evening, he said.

“I never asked for that, but that’s really neat,” he said. “They’ve been super accommodating.”

Marines packed the restaurant with laughter and friendly conversation. Per tradition, the oldest Marine there cut the first piece of cake with a ceremonial sword to give to the youngest Marine.

This year, it was 98-year-old Lonnie Massey — who served from 1938 to 1959 and with the 1st Marine Division at the Battle of the Chosin Reservoir during the Korean War, according to koreanwar.org — and 33-year-old Maj. J.B. Persons.

Men and women sang The Marines’ Hymn in bellows throughout the restaurant. Veteran Jim Beale read former Lt. Gen. John Lejeune’s 1921 letter detailing the creation of the Marine Corps in 1775, along with a message written this November by Marine Corps Gen. Robert Neller commending 242 years of warfighting excellence.

“At places like Trenton, Tripoli, Chapultepec, Belleau Wood, Guadalcanal, Chosin, Khe Sanh, Fallujah, Sangin, and so many others, Marines have fought with an inner spirit — a spirit that bonds us, binds us together as a cohesive team,” Neller stated. “It’s that intangible spirit that has formed the foundation of our warfighting reputation for the past 242 years.”

Marines recalled their years of service fondly, starting with training at the Marine Corps Recruit Depot at Parris Island, S.C.

“It made me a man,” said Marine veteran Jack West. “Parris Island straightened me out.”

These trials and hardships forced Marines to become part of something bigger than themselves, Persons said.

“It gives you confidence of knowing what your limits are, and that you can push past them,” he said.

“You can take off the uniform, but being a Marine doesn’t have an expiration date,” Lemons said.

That sentiment was echoed by many others in the restaurant.

“I would defend this country tomorrow if I had to,” said George Staudter, 86, active duty from 1950 to ’54 as a crew chief for helicopters in the Korean War.

There were also thoughts and prayers for William “Bill” Harrell III, who passed away on April 14 at age 75. Friends and family at the event described him as a gregarious person that never met a stranger.

She said he “lived and breathed the Marine Corps.”

William McCarter has been a regular at the Riverfront Golf Club in North Suffolk since it opened in 1999. The... read more