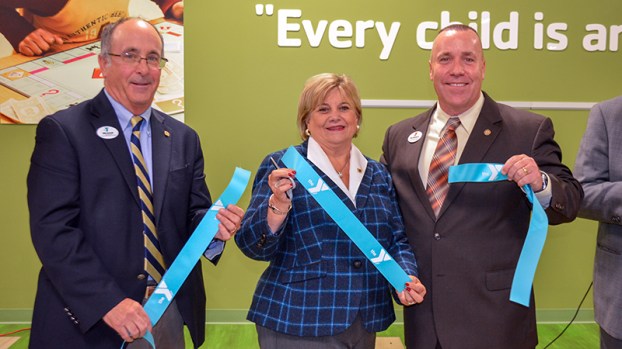 A ribbon cutting on Thursday marked improvements and renovations at the Suffolk Family YMCA on Godwin Boulevard.

YMCA officials and staff joined business partners and city leaders in the ceremony that marked the end of an 18-month, $3.2-million investment to revitalize the Y for its members and prepare for its bright future in a growing Suffolk corridor, Executive Director Rick Matthews said.

“The city of Suffolk is growing, and this YMCA is built to meet that need,” Matthews said.

Cardio machines, free weights, functional equipment, and reupholstered and repainted weight racks and strength equipment are now consolidated in one, much larger space in the front of the building towards Godwin Boulevard.

Project manager Don Jones said one of the goals was to create a more modern look.

“We wanted a more modern look, so we built out front towards the road to mask the dated, existing building,” Jones said.

“I call this the HGTV makeover of the YMCA. We truly converted lemons to lemonade.”

The new “Stay and Play” child care center adjacent to the lobby features broad windows for plenty of natural light and great visibility for parents to watch their children during workouts, Jones said.

Dated ceramic tile in the building’s interior was replaced, and fresh coats of vibrant colors were added. The look of the gym — from the youth and teen center to conference space on the second floor — was re-tailored for a more modern, energizing aesthetic, according to Susan Pniewski, interior designer with Christopher West Interiors.

“When you’re in a Y, you want to move, so I tried to energize people and get them to move,” Pniewski said.

Woodard said a 20-foot bay was also removed from the youth and teen center during construction to dedicate 6,500-square-feet of space on the other side of the wall for Sentara therapy programs.

The Sentara therapy center allows the hospital to keep up with the growing demand for services in the Suffolk corridor.

“It’s just so much more convenient for them,” said Sentara Obici Hospital President Dr. Steve Julian about patients at the center. “Then, when they’re done with physical therapy, they can move back over to the (YMCA).”

“I just felt strongly that this would be a key property for the future,” Birdsong said.

With Sentara Obici Hospital across the street, a new CVS Pharmacy next door and more housing in development, that prediction remains accurate, according to Mayor Linda Johnson.

“Now we are growing for the future,” Johnson said. “It gets bigger and better.”

The Suffolk Family YMCA will hold a grand re-opening celebration and open house this Saturday from 10 a.m. to 2 p.m. There will be live music, bounce houses, children’s activities, refreshments and tours, and it is open to all.

A federal grand jury on Wednesday indicted nine people, including a Carrollton couple and their grown son, on charges involving... read more