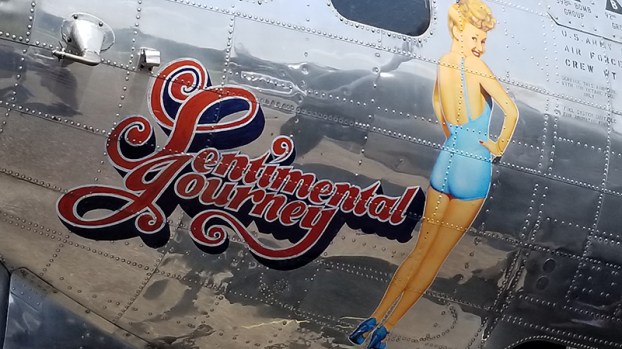 The Sentimental Journey, a fully restored B-17 bomber, gleams in the sunlight at the Hampton Roads Executive Airport during a recent visit.

Jim Ritchie thinks about his dad a lot during his volunteer work with the Commemorative Air Force.
Ritchie is a flight crew chief, flight engineer and flight mechanic on a B-17 bomber like the one his father flew during World War II. His father flew 35 missions before transferring back to a base in America to train on the B-29 bombers, which he later flew in the Pacific Theater prior to the end of the war.

But it’s not just his father on his mind when he’s flying the B-17.

“Not only him, you think about the kids that flew these during the war,” he said. “My father was considered old. He was 26.”

The B-17 piloted by Ritchie for the Commemorative Air Force was in the area in September at the Hampton Roads Executive Airport, on U.S. Route 58 in Chesapeake — close to Western Branch, as the plane flies. There were opportunities for the public to tour and fly in the plane. 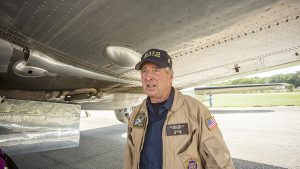 “Sentimental Journey” is a Boeing plane that was manufactured by Douglas Aircraft Company under contract. It rolled off an assembly line in California in November 1944 and soon entered the war effort, according to Ritchie.

But while the first B-17s went into combat in 1941 and earned a deadly reputation with the Japanese, this particular plane didn’t see combat, as the war was already nearly over when it was built. It was sent to the Pacific Theater but wound up doing photo reconnaissance, mapping and nuclear testing work.

Later, the plane was acquired by a firefighting company, where it became Tanker No. 17 and flew missions across the western half of the United States to fight wildfires until the Commemorative Air Force acquired it about 30 years ago.

“She’s pretty much the queen of our fleet, obviously,” Ritchie said.

Donald Williams, pilot services manager for Hampton Roads Executive Airport, was instrumental in arranging the B-17’s visit and also got to take a flight while it was in town. He said it fulfilled one of his bucket-list items.

“I’ve always been in love with this plane,” Williams said.

He noted that a Bombardier Challenger — a multi-million-dollar private jet — was waiting to take off from the airport during a flight for media that week and waited for the B-17 to land before it made its attempt. 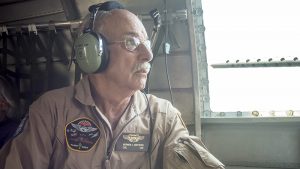 Vernon J. Mathern, a colonel with the Arizona Airbase of the Commemorative Air Force, watches from a window of the Sentimental Journey during a takeoff from the Hampton Roads Executive Airport.

“Pilots respect the past,” he said. “It’s something we always want to cherish. It reminds us where we come from.”

Those who toured the plane were able to view signatures on it from veterans who have visited. Only veterans who flew on a B-17 during the war are allowed to sign, and many who have done so noted the years they served, their units and, in some cases, the dates they were shot down in combat.

Ritchie said meeting veterans is a favorite part of their volunteer work for the crew.

“We get fewer and fewer,” he said. “At most stops, we’re lucky to get a handful.”

Proceeds from the flights and tours help support the upkeep of the B-17, which headed to Bristol, Tenn., following its stay at the Hampton Roads Executive Airport.

Visit azcaf.org for more information or to check out the plane’s schedule.

Western Branch resident Roger Hirsh grew up in the military and raised a Navy family with his fellow Navy veteran... read more