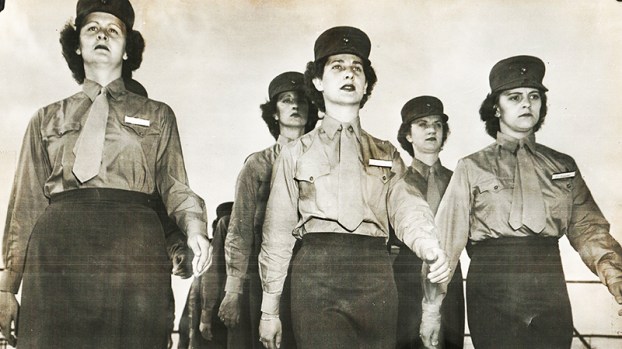 Millie Barina, back row on the right, marches with the first 22 women to be enlisted as full-time, active-duty marines in 1949. (Submitted Photo)

A tiny ad in the Racine, Wisc., newspaper caught Millie Barina’s eye. The U.S. Marines were looking for a few good women, the first to enlist as full, active-duty Marines.

It was 1948 and Barina, 20, worked in the office of the John Oster Company, a small appliance manufacturer. A first-generation American, she had lived within a block of Lake Michigan all her life.

“My father was so old fashioned that I was in bobby socks until I was 15,” she said. “He thought I should take piano lessons from the nuns, but Mother talked him into the dance lessons I loved.”

Her one memorable break from Racine had been a trip to Chicago with her dance class in August 1945. It happened to be on VJ Day, Aug. 14. 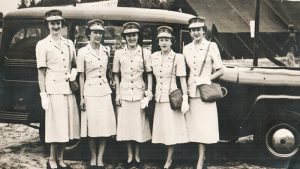 Millie Barina, left, stands with four of her fellow U.S. Marines, among the first 22 women allowed to serve full-time active duty in that branch of the armed services. (Submitted Photo)

“I remember all the sailors from the Great Lakes seemed to be there, corks were popping and people were celebrating, “ she said. “I was 16 and loving it, but my dance teacher was having a fit.”

Now Barina longed, too, for new scenery, new people, new adventures, so she and a friend from Racine enlisted. Since she was not yet 21, her mother signed for her to join.

Women had been enlisting in the Marine Corps Reserve for 30 years, serving in both World Wars. In 1948, however, the Women’s Armed Services Integration Act authorized 110 regular Women Marine officers and 1,000 enlisted over two years, with the recruits coming first from active-duty Reserve Women Marines or veterans not on active duty.

When Barina reported for training at Parris Island in February 1949, she was one of those first regular women Marines.

“The girls that trained us were Marine reserves from World War II,” she said. “I was athletic, danced, played basketball and volleyball, so I loved boot camp. We wore ‘peanut suits,’ one-piece gym suits, for active training. And we got away with murder, since we were the first platoon of enlisted women — just 22 of us from all over the country.” 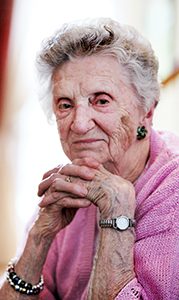 “The men on Parris Island got the word when we arrived there for boot camp,” she said. “We had a wonderful colonel, Paula B. Beckley, who was like a mother to us, and she’d check out any of the men we were interested in, just to be sure they weren’t married.”

”We wore shirts and ties with midi-length straight skirts, neutral hose and ugly shoes — and girdles to hold up our cotton lisle hose,” she remembered. “They used to come by and pinch our waists to assure we were wearing our girdles.”

The Marines had no dress or summer uniforms ready when the first recruits arrived.

“We went to Quantico to model the green-and-white seersucker summer uniforms, and I was picked as one of the women to model for the new dress blues, I guess because I was tall,’ she remembered.

After training, Barina went to Washington, D.C., assigned to secretarial work in the recruiting department of the Marine Headquarters.

“Major Tom Fields was happy to have us, and we felt like we were relieving guys to go on to Korea,” she said. “They didn’t have barracks for us yet so, for a while, we lived in the Salvation Army hotel and took a bus to work every day. We always stood on the bus so we wouldn’t wrinkle our uniforms before inspection each day.”

Later they lived in WAVE barracks until their own barracks opened with small individual rooms, each with a single bunk. The women did their own laundry and took turns, armed with flashlights, patrolling the barracks at night.

While she was in D.C., the Marines called for volunteers to teach new recruits at Parris Island. She had always wanted to teach, particularly physical education, so she volunteered, returned to Parris Island and met Harry Schoedler, a Marine mess sergeant who could bake like a dream.

One Sunday after church, Barina and two friends dropped into a slap shoot (bar). Schoedler stopped by their table to chat. Later, he confessed that he had picked her out that day as the woman he would marry.

“He wanted to get married that weekend,” she said. “But we waited for almost six months so we could get married in my home church, St. John’s in Racine, on April 14, 1950.”

Their son, Michael, arrived 9 months and a day later. The Marines allowed her to stay in the Corps until she was too pregnant to button her shirt. No one had yet considered the need for maternity uniforms. She left with the rank of corporal, just before her platoon received a blanket promotion to sergeant.

The Schoedlers lived near Parris Island until Harry’s first deployment. He served in both Korea and Vietnam, and the couple added two daughters to their family.

Year later, after a stint at Camp Pendleton and three years in Hawaii, the Schoedlers settled in Hampton Roads in 1967. The family lived in Norfolk Highlands while Harry Schoedler managed several of the area officers clubs. Millie Schoedler worked as an executive assistant.

When the children were grown, the Schoedlers downsized to a condo in Western Branch. Harry died in 1993, and Millie moved to, first, Churchland Commons, and then to the Emily Green Shores assisted living center, just across the Western Branch in Portsmouth.

“I was in the Marines for two years, six months and 18 days, and it was a different world,” she said. “Joining the Marines was the best thing I ever did — I wouldn’t trade it for anything. “

Now 89, she uses a walker to stride along the assisted living center’s hallway. She prays every day, she said, that God will not take her still-sharp memories from her. In her heart, almost 70 years later, she is still and always will be, a Marine.

It’s not quite the motor mile, but for 2,394 linear feet of Route 17 in Western Branch, there are vehicles... read more