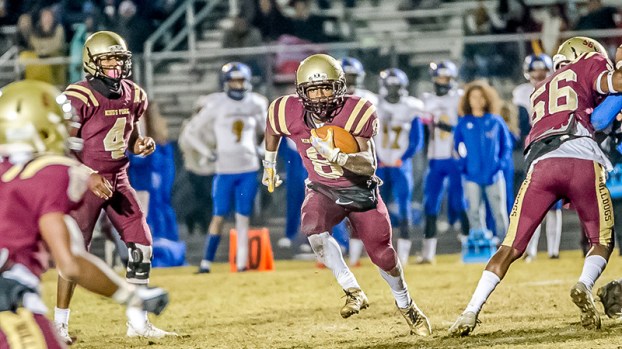 Senior Bulldog Darran Butts was named the 4A Region Offensive Player of the Year. He was joined on the all-region teams by nine fellow Bulldogs, and two others were named honorable mention. Danny Haymond Photo

After a historic year for the King’s Fork High School football team, postseason awards continue to roll in.

The Bulldogs finished their regular season with a 9-1 record. That earned them the No. 1 seed in the Class 4 Region A. The Bulldogs ended their season as the 4A runner-up after taking a loss to Lafayette High School. However, the Bulldogs continue to get recognized for their performance.

Darran Butts received the 4A Region Offensive Player of the Year award. Butts rushed for 1,744 yards and 25 touchdowns this season. Butts won this award in the Southeastern District as well.

He was joined by Justin German, Cherrod Joe and Jaylon Grant on the offensive first team. German was the first team quarterback, while Joe was selected as a receiver and Grant an offensive lineman.

The Bulldogs placed another three on the second team defense. Treyshaun Mitchell was selected as a defensive lineman while Bryan Walker was selected at linebacker and T.J. Hart at defensive back. Sam Dunn and Dennis Whitehead were honorable mentions.

With all-state voting yet to occur, the Bulldogs could wind up with a couple of all-state placements as well.