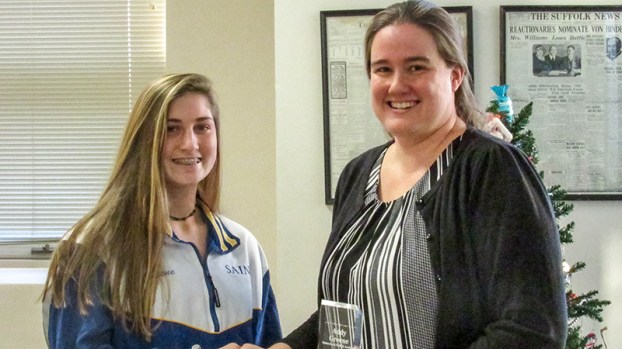 Darran Butts and Addy Greene were selected the male and female Suffolk News-Herald Players of the Year for fall 2017.

Butts, an integral part of the Bulldogs’ success this season, enjoyed an accomplished season. King’s Fork finished with a 11-2 record and a Southeastern District title and earned its first No. 1 seed in region play in school history.

He finished his senior campaign with more than 1,800 rushing yards and 25-plus touchdowns. That production led to him being named the Southeastern District Player of the Year.

It didn’t stop there for the Bulldog senior. Because of his productive senior season, he was also named the 4A Region Offensive Player of the Year.

Last year, Butts had a successful season, which led to all eyes being put on him around Hampton Roads for this year. But things took a turn at the beginning of the year, when his mother died. Before her death, he told her he was going to work hard every day for her, and it is safe to say he has.

“This an honor and I truly appreciate it,” Butts said of his fall POTY award. “I felt like I did my best for the city. I feel like my mom is proud of me.”

It’s not all about what he can do on the field when people speak about Butts. His coach and teammates speak of how good of a person he is and how he fights through adversity.

Greene and the Lady Saints came into this season with a bit of an underdog reputation. It was obvious NSA was losing some of its most decorated players, so people expected somewhat of a drop-off.

But the Lady Saints knew what they had and had plans to prove people wrong.

NSA went through the regular season going undefeated in the Tidewater Conference of Independent Schools, earning the No. 1 seed outright in the regular season as they did the year before. Greene was chosen as the TCIS Player of the Year after a successful season.

The sophomore was a driving force behind the Lady Saints, which ended up advancing all the way to the state semifinals before their season came to an end. It was far from what many had expected. Because of a strong regular season and postseason play, Greene was also selected first team all-state.

“I think it says I have grown a lot as a player this year, but also so had the team,” Greene said of her success this year. “We had come a long way from where we had started and what we accomplished this season speaks to that.”

With Greene only being a sophomore, the future is bright for her. As for Butts, he will likely be blazing a college field next fall.

Freeman makes a name for himself

Jaden Freeman was voted Suffolk News-Herald Player of the Week after an 11-point performance which included a game-winner. The Nansemond-Suffolk... read more