A medal of honor

Did you know that the Churchland/Western Branch community was home to a Medal of Honor recipient?

By presidential order on June 8, 1955, 1st Lt. Richard T. Shea was posthumously awarded the Medal of Honor, the highest award for valor in action against an enemy force that can be given to an individual serving in the armed services of the United States.

His citation tells the story: 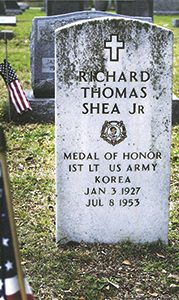 By presidential order on June 8, 1955, 1st Lt. Richard T. Shea was posthumously awarded the Medal of Honor, the highest award for valor in action against an enemy force that can be given to an individual serving in the armed services of the United States.

“On the night of 6 July [1953], he was supervising the reinforcement of defensive positions when the enemy attacked with great numerical superiority. Voluntarily proceeding to the area most threatened, he organized and led a counterattack and, in the bitter fighting which ensued, closed with and killed 2 hostile soldiers with his trench knife. Calmly moving among the men, checking positions, steadying and urging the troops to hold firm, he fought side by side with them throughout the night. Despite heavy losses, the hostile force pressed the assault with determination, and at dawn made an all-out attempt to overrun friendly elements. Charging forward to meet the challenge, 1st Lt. Shea and his gallant men drove back the hostile troops. Elements of Company G joined the defense on the afternoon of 7 July, having lost key personnel through casualties. Immediately integrating these troops into his unit, 1st Lt. Shea rallied a group of 20 men and again charged the enemy. Although wounded in this action, he refused evacuation and continued to lead the counterattack. When the assaulting element was pinned down by heavy machinegun fire, he personally rushed the emplacement and, firing his carbine and lobbing grenades with deadly accuracy, neutralized the weapon and killed 3 of the enemy. With forceful leadership and by his heroic example, 1st Lt. Shea coordinated and directed a holding action throughout the night and the following morning. On 8 July, the enemy attacked again. Despite additional wounds, he launched a determined counterattack and was last seen in close hand-to-hand combat with the enemy.”

Shea grew up off Dock Landing Road, was an altar boy at St. Mary’s Catholic Church in Bowers Hill, and went to school from the first grade on with Paul Smith, who grew up on a farm in Hatton Point.

“Richard was very serious, a real leader, a good friends and made good grades,” Smith said.

“He was our class president every year. When we were seniors, the senior class president was automatically named to the student council, a rule change to get him on the council. Back then high school seniors drove the school buses, and Richard drove the Dock Landing Road bus.”

Although he never played a sport growing up, Shea was inducted, posthumously, into the Virginia Sports Hall of Fame in 1987. Once again, the citation tells the story:

“Portsmouth-born, Churchland High and Virginia Tech educated, and West Point trained, Dick Shea was the U.S. Military Academy’s greatest distance runner of all time. He won nine championship races and set five Academy track records. He won the national cross-country championship and was ranked among the country’s top runners in the mile and two-mile. The young track star also included the two-mile title in the Penn Relays and a new record in the Heptagonal indoor meet at Boston among his conquests. In one race, Shea defeated Horace Ashenfelter, who won a gold medal in the 1952 Olympics at Helsinki.
Shea became interested in track during an overseas assignment in Berlin as an enlisted man in World War II. Twice named to the coaches’ All-America track team, the Virginian graduated from West Point with high honors, receiving the award as the cadet contributing most to athletics during the Academy career.
Shea was invited to become a member of the U.S. Olympic track team but rejected the invitation in order to go right into the Army as a second lieutenant. Shea, at the age of 26, was killed while leading an assault on Pork Chop Hill in Korea on July 8, 1953.

Shea is buried in Olive Branch Cemetery with his two brothers — Robert Bernard Shea, a pilot, and William George Shea Sr., a sailor in the Navy during World War II.

In 1958, the U.S. Military Academy dedicated its stadium as Shea Stadium. In 2008, Churchland High School dedicated a commemorative display honoring him. A year later, Caleb Polston of Portsmouth created the Richard T. Shea Memorial Garden in Pughsville, across from the VFW post, as an Eagle Scout project.

— Adapted from the book “Truckin’ on the Western Branch,” published in 2014 by Suffolk River Heritage. For purchase information, visit suffolk-river-heritage.org.